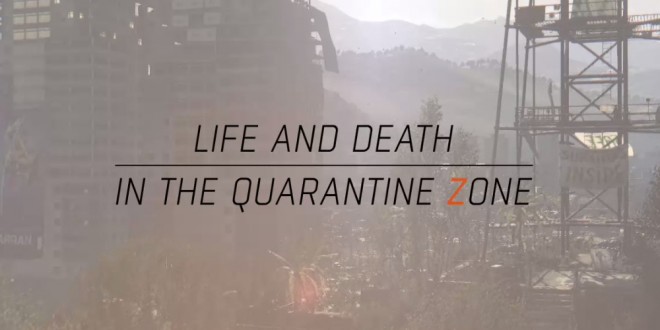 Detailed in a press release published today, Techland has launched a little interactive story that tells the life and death of survivors within the quarantine zone of Dying Light. The interactivity of the story itself is limited, but it seamlessly switches between two different versions of the story. By pressing and holding the Z key (or by holding left-click on the half-filled circle), viewers can flip between a daytime telling of the story and a nighttime telling, both of which run simultaneously on top of each other.

Aptly titled “Life and Death in the Quarantine Zone”, the mini-story shows how certain events may play out depending on whether or not they occur during the night or during the day. The notion of this is punctuated by the story’s use of content and audio. In the daytime telling, zombies are widely dispersed, and the music could be considered cautious in tone. Meanwhile, in the nighttime telling, zombies are a lot more abundant, and the music becomes dramatic and urgent.

The story can be paused and continued freely, but a bug within the interactive story (at the time of publication) plays the audio of both versions at the same time when playing for the first time and after being paused. Switching between day and night quickly fixes this issue, thankfully. This “refresh” is recommended, as the clashing audio sequences and cues as the two versions play side-by-side will be confusing. There’s currently no way to rewind the story or mute and / or lower the volume, either. The interactive story itself can be viewed on its own webpage via the official Dying Light website.

Dying Light is available both digitally and physically in North and South America, while versions in other regions are currently only available digitally, However, boxed copies of the game will be shipping to Europe, Asia, Africa and Oceania tomorrow, on Friday, February 27th. Last week, it was declared that Dying Light was the United States’ best-selling game in January, over 1.2 million unique registered gamers playing Techland’s new zombie game over the course of five days. Because of this, the game has also been labelled as “the fastest-selling new IP in the survival horror genre.”

Preferring to be referred to as "KingSongbird", Kieran is a serious, yet laid-back person with a particular soft spot for RTS games and anything Sci-Fi.
@KingSongbird
Previous Sierra Will Publish Velocity 2X on PC / Xbox One This Summer
Next Mortal Kombat X Will Have Over 100 Brutalities

Dying Light surely is one of the most famous games of the last semester but ...