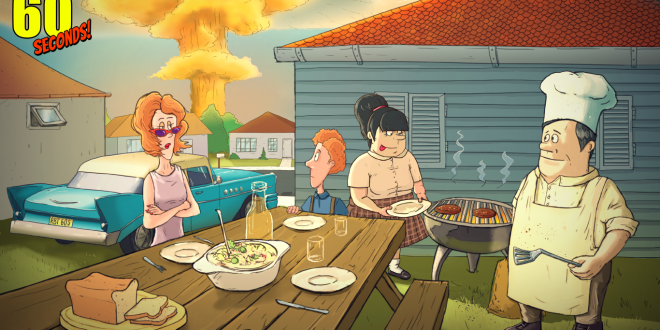 Today’s Greenlight standout is 60 Seconds!, an adventure game with elements of survival. Developed by Robot Gentleman, 60 Seconds! is described as an arcade game with a hint of rogue-like elements added for good measure. The initial draw of the game was the interesting visual style that it presents, as well as my curiosity as to what exactly the title was referring to. I really like 60 Seconds!, as it adds an immediate element of interest, mainly trying to figure out what exactly you must do within those 60 seconds. 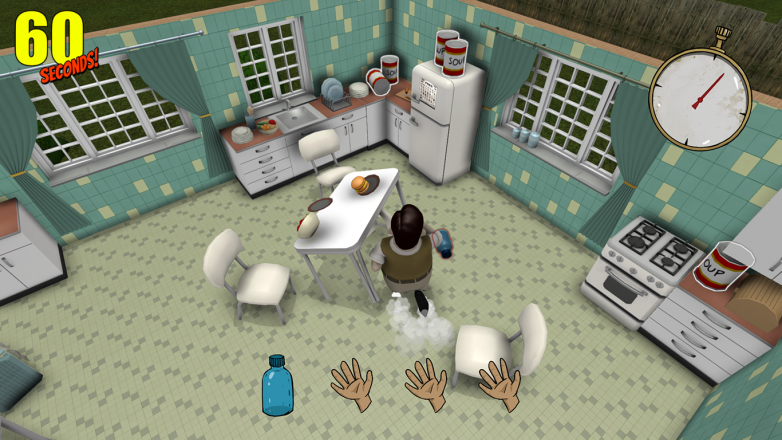 In 60 Seconds!, you play as Ted, a family man who is enjoying an average day at home until he receives a government alert warning him of an oncoming nuclear apocalypse. This early warning allows Ted to have 60 seconds to prepare by rushing around his home scavenging supplies and family members before he must take shelter. This beginning stage of the game is only the start of the experience that 60 Seconds! is offering. Once the danger passes, you must attempt to survive for as long as possible with the supplies that you have scavenged. Let’s not forget that Ted has an entire family to care for as well, if he decides to gather them before venturing into the shelter. 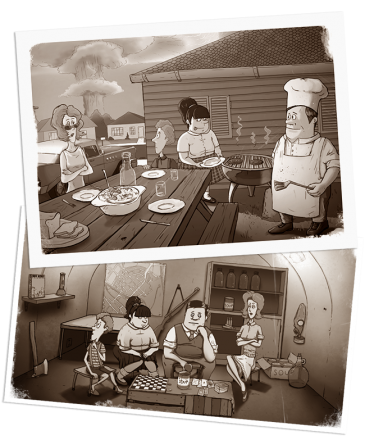 60 Seconds! plans to approach players with difficult decisions and very little time in which to make those decisions. With only 60 seconds available for preparation, you must choose which items are most important, and those items will play a vital role in your survival as the game progresses. There are many different scenarios to play out depending on your choices, so we can expect 60 Seconds! to contain a great amount of replayability. 60 Seconds’! unique visual style and compelling gameplay definitely place it on my radar and I would definitely recommend taking a look at it at some point in the near future.

Robot Gentleman have stated that the game will not be released into early access as they are only going to release a fully finished product. They also state that they have plans to continue support after releasing by adding additional content to the game, which will all be available as free DLC for anyone who owns 60 Seconds!. If you are interested in hearing more about 60 Seconds!, you can find them on Greenlight, or on their official site.

I enjoy playing pretty much any type of game out there. My passion lies in finding the gems of the indie gaming world. When I'm not playing games, I'm programming them, at the gym, or tending to my small army of cats. Writing has always been a part of my life and I'm grateful for the opportunity to get my content out there for people to see.
@spf0227
Previous Sparkle 2 Looking to Release on Steam
Next Legend of Zelda WiiU No Longer Scheduled for 2015 Release