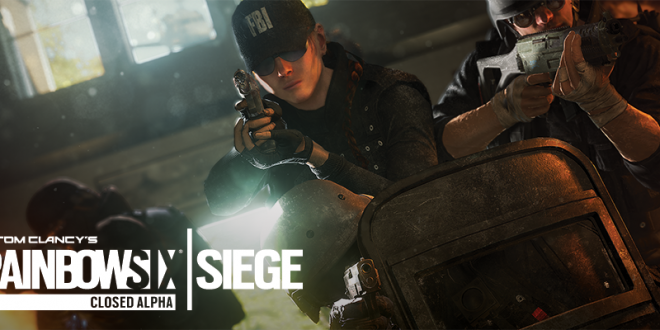 Rainbow Six Siege’s invites to its closed alpha have been sent out and should be received sometime in the near future, if not already. For those of you who signed up for the alpha, make sure to check your inbox and spam folders to ensure that you don’t miss out on a chance to give the game a try and provide Ubisoft with some helpful feedback. Anyone who has not received an invite, don’t fret, as I’m sure there will be more opportunities in the future to get your hands on Rainbow Six Siege prior to release.

Anyone with access to the alpha client can begin downloading it now; however, the Rainbow Six Siege will not be playable until Tuesday, April 7th at 10am eastern time and is scheduled to run until the same time on Monday, April 13th. According to a blog post on the official site, this alpha will focus on testing the core gameplay loop and the server infrastructure, as well as gather general feedback from the player. So those of us who are fortunate enough to have gained access should be sure to focus on these areas the most when testing out the game. As always, do not treat the alpha as a demo. The opportunity to test out a game is a privilege and should be taken seriously in the sense that you are at least reporting bugs that you encounter while playing the game.

Rainbow Six Siege is not currently scheduled for a specific release date other than “sometime in 2015”. However, those of you dying for early access to the game can pre-order the game for guaranteed access to future betas. Also, you can go to the Rainbow Six Siege site right now and sign up for a chance to take part in their closed beta. Rainbow Six Siege has been a long time in the making, and I hope that all of you have an opportunity to take part in providing feedback to make the game all the more enjoyable upon release.

I enjoy playing pretty much any type of game out there. My passion lies in finding the gems of the indie gaming world. When I'm not playing games, I'm programming them, at the gym, or tending to my small army of cats. Writing has always been a part of my life and I'm grateful for the opportunity to get my content out there for people to see.
@spf0227
Previous Underground Moon City is a definite possibility with lava tubes
Next Steam Greenlight Spotlight: TurnOn