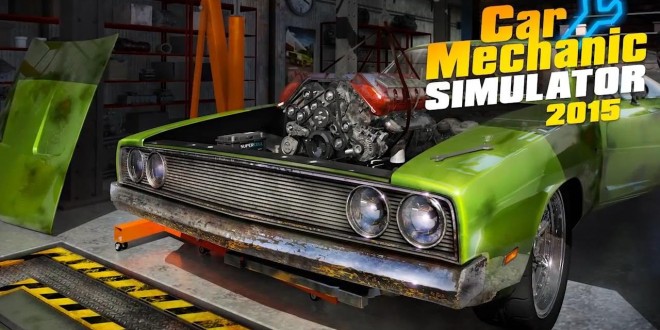 *Disclaimer: This is a first impressions article. This is not a full review of Car Mechanic Simulator 2015, nor should it be taken as such*

Simulation games are not typically my thing. From games like Arma 3, where I find myself missing every shot, to management simulations such as Football Manager, I just find that I can never get sucked into the games like others. Imagine my surprise when I found myself unable to put Car Mechanic Simulator 2015 down. I scheduled a session of three hours to get a good feel for the game and its progression, and found myself still in my chair way past my scheduled time, unable to tear away from the game.

Car Mechanic Simulator has some sinister addictive element to it. I couldn’t say whether it was the progression, the problem-solving, or the actual repair, but there is definitely something about that game that kept me coming back and playing more and more. As the game begins, you are offered a tutorial, which was just dreadful. I often found myself left without help for long periods of time, only to have a random message pop up when I interacted with an object in my garage. Unfortunately, the tutorial does not do a good job of introducing new players to the mechanics or the goals of Car Mechanic Simulator, thus I found myself searching forums in order to get a better grasp of the game. It seems that this lack of direction may drive a lot of players off initially, and I find that discouraging. If you are able to get the basics under your belt, then there is much fun to be had with the game, so definitely have a look online if you find yourself stumped by the tutorial. 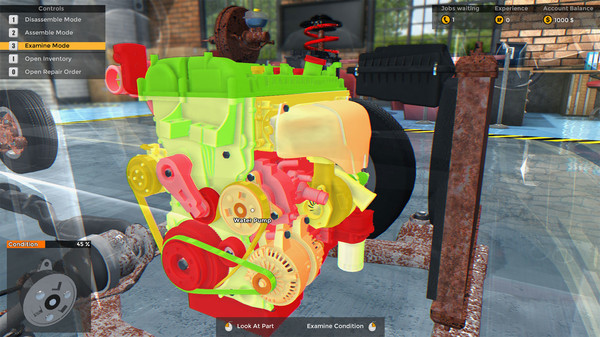 The moment-to-moment gameplay of Car Mechanic Simulator consists of accepting or declining various jobs, and fulfilling the requests of the jobs that you do accept. You start off with three stations in your garage, a main parking area, and two lifts. This means that at any time, you can have three cars in your garage (granted, I haven’t played dozens of hours so there may be an ability to upgrade the garage at some point). The work orders contain all of the customer complaints about their vehicle, as well as occasionally containing information about exactly which parts need to be replaced. The game becomes interesting when it stops telling you which parts need to be replaced and tasks you with figuring it out on your own based on the customers’ descriptions of their issues. There are various tools that you can make use of in order to diagnose issues, and once a problem is found parts can be purchased and the repair process can begin. Another method of diagnosis is to take the car out to the test track, where you give it a spin and try to get a feel for any issues that the vehicle may be experiencing.

Repairing the vehicles in Car Mechanic Simulator is quite a bit of fun. I have one semi-annoying issue when it comes to repairing my vehicle, and this is down to the camera control. Many of the parts you need to repair are small and difficult to see, and the camera is extremely difficult to manipulate in an effective way, which often caused me to miss damaged parts or spend a few minutes trying to adjust my camera angle so I can get a better view. The camera system definitely needs some work, especially when you are working on a car that is up on a lift. I often found myself trying to look at the tire, and instead having three or four other parts in my field-of-view blocking it. However, the nuts and bolts that you need to unscrew do become highlighted, which definitely does well to help with the camera issues as you can always see what you need to work on, even if it’s not directly. 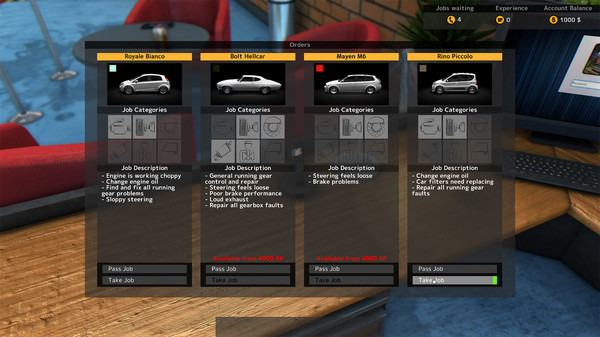 In terms of progression, Car Mechanic Simulator has a fairly surprising amount of depth. Throughout the garage are a few toolboxes which you can use to upgrade your abilities, including how fast you can unscrew bolts, as well as unlocking various tools that can assist you in diagnosing issues with customer vehicles. As you complete jobs, you gain experience points. Every 1,000 experience points nets you one skill point that can be used to upgrade abilities or unlock gear. A really awesome feature of the game is that you can also choose to use these skill points in order to customize the look of your garage. I definitely feel like progression is necessary in a game such as Car Mechanic Simulator, so it’s nice to see that it was given some decent thought and not something that was just tossed in as an afterthought. The progression system is one of the things that really keeps me hooked on the game. I want to upgrade all of my abilities and be able to create the garage of my dreams, and until this goal is met I can see myself playing lots more of Car Mechanic Simulator.

Finally, something that I have not had much of a chance to play around with, but I know is a feature in the game is the idea of restoring old cars. Car Mechanic Simulator features auctions that you can visit in order to purchase old junkers, which you can then bring to your garage and renovate to turn a major profit. If you’re more of a collector, you can also keep the cars, which you can admire at any time. I’m definitely looking forward to building up a respectable collection, which is just another of the things that will keep me hooked on Car Mechanic Simulator 2015.

I enjoy playing pretty much any type of game out there. My passion lies in finding the gems of the indie gaming world. When I'm not playing games, I'm programming them, at the gym, or tending to my small army of cats. Writing has always been a part of my life and I'm grateful for the opportunity to get my content out there for people to see.
@spf0227
Previous NA LCS Summer Promotion Preview
Next Steam Greenlight Spotlight: Grey Cubes