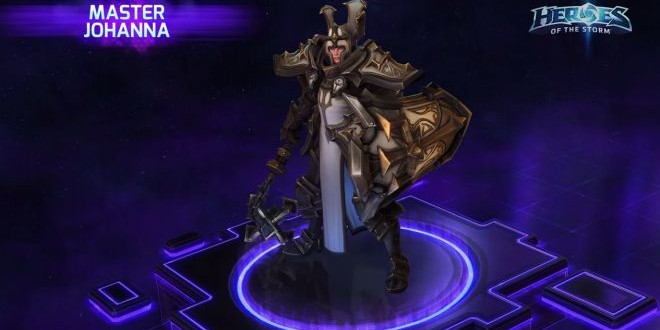 Johanna the Crusader Joins Heroes of the Storm

Blizzard has revealed that Johanna the Crusader will be joining the Heroes of the Storm battle. Johanna is known for her appearance as a playable character in Diablo 3: Reaper of Souls. The reveal can be seen in the trailer below, along with some upcoming skins:

But that’s not all. Heroes Nexus did some datamining and discovered all of her abilities and talents. Similar to how she was in Diablo 3, Johanna will play as a tanky support hero in Heroes of the Storm. Her abilities draw heavily from the noteworthy spells from Diablo, allowing her to jump in the fight and absorb damage. She has a notable suction ability to bring her enemies towards her called Condemn and can follow up with a Shield Glare to blind them. One of her Heroic Abilities is called Blessed Shield in which Johanna throws a shield out that stuns and bounces among enemies. The other Heroic is called Falling Sword, which involves Johanna jumping to an area and knocking enemies in the air. Full details of Johanna’s abilities and talents can be found here, as well as all of Kael’thas’s, who was recently announced.

With the last patch being six weeks ago, Heroes of the Storm fans are hungry for an update. Rumors are that Kael’thas will be coming on May 12th along with a sizable patch. Now that Johanna has been revealed and detailed, it would appear that she would be joining Kael’thas in the next patch. However, a quick tweet from Blizzard denied that notion:

@Bitme567 @BlizzJohnzee Kael'thas will be the only Hero released in the next patch. Johanna is still in development!

As someone who plays Heroes of the Storm far too much, some news on upcoming content is fantastic to hear. It’s also nice to see that a non-Warcraft hero in Johanna is soon to come. So what do you guys think? Is Johanna a worthy addition to Heroes of the Storm? Who would you like to see added next?