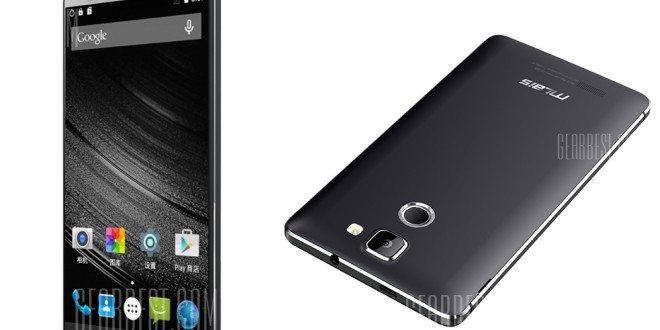 Chinese smartphones are usually not as popular because people have this preconception, I’m inclined to call it stigma towards them. In the past, Chinese companies had made themselves a bad reputation for making cheap quality devices that don’t last very much and that seems to have stuck with them in the international tech community. What we need not forget is that they’ve changed and Chinese smartphone manufacturers are upping their game. A good example of upping the game would be Mlais, a Chinese company that has been manufacturing high quality smartphones for quite a while now and has recently launched a rather impressive Android 5.0 Lollipop smartphone, the Mlais M7.

The Mlais M7 is between a mid-range smartphone and a flagship and can be considered a very honorable example of a good, yet cheap smartphone. OnePlus started the bang for buck bar with the OnePlus One and Chinese companies like Mlais are doing the same thing, only with more options. Mlais has a wide selection of smartphones for every pocket and every preference, and the Mlais M7 is one of their newest releases.

Aside from being a stylish little critter, the Mlais M7 is also powerful and equipped with Android 5.0 Lollipop. One thing that’s truly awesome when it comes to Mlais as a company is that they don’t really fill up your new phone with bloatware. Aside from the usual clock and messaging apps, there won’t be much to bother you if you buy a Mlais M7. There’s very little skinning done so you get a near-stock experience, similar to what you would get on a Motorola smartphone and that’s a big plus for Mlais in my book at least.

Flagship smartphones and even mid-range smartphones from companies like Samsung, HTC, LG and Motorola tend to cost a bit much, not to mention Apple’s iPhone line-up. The Mlais M7 price is only $190 and you get an unlocked dual-SIM unit with a fingerprint sensor and LTE, so that’s already a good deal in my opinion. Smartphones with fingerprint sensors, like the iPhone 6, Samsung Galaxy S6, Galaxy Note 4, HTC One M9 Plus and Meizu MX4 usually go above the $400 mark, so you’re getting great security with the Mlais M7 for less than half that price.

Moreover, the design of the Mlais M7 encompasses all the trends that are en vogue right now, such a phablet format, a good selfie camera, metal frame, slim and sleek design, thin bezels and Android 5.0 Lollipop. The Mlais M7 is now up for pre-order for $190 and te presale ends on May 31, so if you’re interested in upgrading to a high-end Chinese smartphone with a design that will definitely appeal to you, it’s now or never!

When it comes to specs, you won’t be disappointed. First off, the Mlais M7 display is a 5.5 inch IPS display with a 1280*720 resolution. That doesn’t sound like much on paper, but the display in person is actually very bright, sharp and neat. In bright sunlight, you will struggle with it a bit, though, but not as much as to make it unusable. As with any smartphone with a good price, there are trade-offs and the display of the Mlais M7 is one of them. But it’s an acceptable trade-off and most of you, who don’t need a QHD display to use VR glasses or have super-high quality 4K viewing experiences.

Moving on, the Mlais M7 gets a Mediatek MTK6752 64 bit CPU clocked at 1.7 GHz, backed by 3 GB RAM and 16 GB internal storage, which is expandable through a microSD card. The main camera is a 13 MP shooter complete with a flash and AF, while the front camera is a 5 MP shooter. The fact that there’s 4G LTE included is once again, a plus for this phone and makes its bang for buck pretty good. The battery life of the device is above average thanks to the 2600 mAh battery and the slightly inferior display. You’ll get a decent two days of use out of the Mlais M7, provided that you’re a moderate user. As a daily driver, it handles itself well, although if you’re using 4G LTE all day, you’ll probably have to charge at night.

The phone itself is lightweight at 160 grams, although it’s heavier than other flagships out there. Although heavy, the Mlais M7 feels great in the hand and the thin bezels around the screen truly look appealing no matter how you look at them. Even though the Mlais M7 isn’t a mainstream smartphone, it does offer an experience that’s simple, powerful and near to stock, thanks to Android 5.0 Lollipop. It’s a good investment and for the $190 price, it’s a steal in my opinion. Moreover, the price is fitting because in case you don’t like the phone, you won’t have lost too much and can resell for about the same amount if that’s how you roll. But I doubt that the average smartphone user will not like the Mlais M7. Go ahead and check it out and let us know what you think about it. Do you think Chinese smartphone manufacturers are upping the game and the Mlais M7 is a good example or do you think that sticking to mainstream companies is a safer bet?

I’m Load The Game’s co-founder and community manager, and whenever I’m not answering questions on social media platforms, I spend my time digging up the latest news and rumors and writing them up. That’s not to say I’m all work and no fun, not at all. If my spare time allows it, I like to engage in some good old fashioned online carnage. If it’s an MMO with swords and lots of PvP, I’m most likely in it. Oh, and if you’re looking to pick a fight in Tekken or Mortal Kombat, I’ll be more than happy to assist! Connect with me by email markjudge (@) loadthegame.com only
@@MarkJudgeLTG
Previous Fallout 4: Cinematic Trailer Listed on LinkedIn Profile
Next Johanna the Crusader Joins Heroes of the Storm