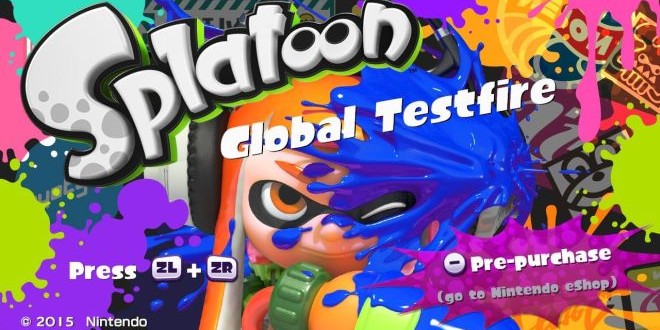 Splatoon’s Global Testfire Has Won Me Over

I wasn’t 100% sold on Splatoon leading up to this past week with how little we actually knew about it. Sure, the E3 demos looked exciting and the prospect of a shooter from Nintendo was interesting, but it wasn’t quite enough. After the Splatoon-focused Nintendo Direct, my interest grew and my worries lessened. After playing Splatoon in the Global Testfire this weekend? I’m all-in on this wacky shooter.

The Splatoon Global Testfire was a bit of a beta, at least, Nintendo’s weird version of a beta. It allowed anyone to hop in and play Splatoon for just an hour at three different times. Those hour-long periods ended far sooner than I wanted due to how much stupid fun I was having. The Testfire only offered two maps, one mode, and four different weapons, but it was enough to get me excited.

What I love about Splatoon is how unique it is in the sea of gritty realistic shooters. The main focus of Splatoon isn’t on eliminating the enemy team, but rather covering every possible surface with ink. The sole mode of the Testfire was called Turf War, and involved trying to cover the map with your team’s ink as much as possible. Covering an area with ink allows your character to turn into squid mode and swim in the ink at a quick pace and refill on ink-ammo. It’s this combination of shooting ink everywhere and swimming quickly around the map that makes Splatoon so fun to play.

Even though the main objective is covering the map in ink, killing other players has its own advantages. Splattering an enemy with ink kills them and sends them back to their spawn point, which means time spent not covering the ground with ink. Splatoon is set to have a number of different weapons, but in the Testfire I was only given access to four of them. The Splattershot was the standard automatic shooter and did well at medium to short distances. The Splat Roller was the most popular pick I saw and allows players to cover a wide area on the ground with ink while destroying anyone in their way. My personal favorite was the Splattershot Jr., which is essentially a short range, high velocity uzi. Because so many players were using the Splat Roller, my Splattershot Jr. was able to make quick work of the mindless ink rolling players getting in close with me. The fourth weapon was the sniper rifle of the bunch, called  the Splat Charger. After charging for a second, the Splat Charger lets off a long range blast that kills enemies in one hit. It wasn’t the best at laying ink down, but it was great at decimating enemies from afar when in an advantageous position.

Along with the main weapons were sub-weapons and came in the form of grenades. These grenades were great at flushing out enemies hiding in cover but come at a cost of large amounts of ink-ammo used. Spray enough ink all over the map and your special weapon will be unlocked. These one-time use weapons allow you gain an advantage on the enemy in different ways. The protective shield special weapon gave my Splattershot Jr. the durability needed to get into the thick of things while the infinite grenade special gave my vulnerable Splat Charger loadout the necessary damage when getting overwhelmed. I can’t wait to see what different loadouts I can come up with once Splatoon is officially released.

The effectiveness of your choice of weapon depends on the map at hand. The two maps in the Testfire were cutely named Walleye Warehouse and and Saltspray Rig. The former featured close quarters combat with enemies around the corner at every turn. Saltspray Rig was a larger map and had narrow pathways leading to open firing areas. These two contrasted maps demonstrated how much differently you need to play in order to succeed. What I wasn’t sold on was the level of maneuverability these maps allowed. You can spray ink on walls to climb up them, but far too often these walls had barriers that stopped any climbing ability. I hope that the other maps in the full version of Splatoon have a bit more to offer in this regard.

Throughout my two hours spent with Splatoon, I was never not having fun. The colorful graphic style made it wonderful to look at and the unique ink-filled gameplay was refreshing. Having the focus on inking up the map instead of killing enemies gave way to a shooter that is simply unlike anything I’ve ever played. The varied weapon selection gave way for exciting fights and made sure that no two games were ever the same. After finally getting to play Splatoon, it’s safe to say my hype meter is at a supreme high.

Previous Why I switched from iOS to Android.
Next Assassin’s Creed: Syndicate Will Have a Female Protagonist – Don’t Celebrate Just Yet