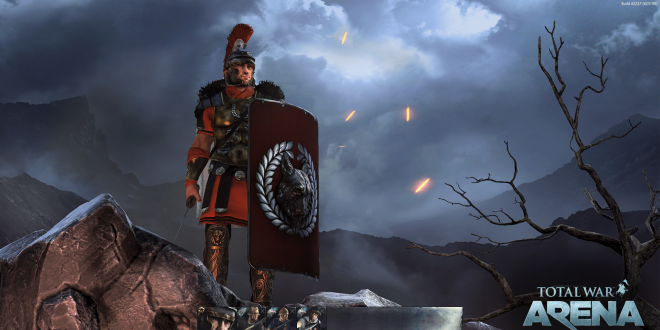 Total War: Arena is a new free to play game that is currently under development at Creative Assembly. To rile up a bit of excitement among fans they have released a gameplay trailer of the current Alpha build. The game is going to be entirely multiplayer hosting large scale 10 vs. 10 battles between gamers in what looks to be in the iconic Total War battle style. The trailer shows a few examples of these battles playing out in various campaign map types. Now, the game won’t allow you to battle with 10 large armies on either side; instead, it seems as though you will be given control of three units per person making up a single cohesive 10 player team. This should make teamwork and strategy essential to anyone that wants to succeed in Total War: Arena.

If Total War: Arena’s trailer can be relied upon, it looks as if there are currently Greek and Roman factions and it is unclear if there will be more. The trailer also has a brief glimpse of boats landing along a coast. If this is the case, it seems as if coastal battles will be present with the potential of starting out at sea, but sea battles may be absent. I doubt this will concern many, Total War’s sea battles have never been as exciting as the standard land combat.

Total War: Arena will allow the customization and progression of heroes and units. Although the game is free to play there will be the option for people to purchase items to customize their units. Unfortunately, it seems as though people will also be able to pay to speed up their progression. I’m hoping that this means the game won’t become pay to win, we can only wait and see.

It is exciting to see a game devoted solely around Total War’s combat system. For anyone looking for more details feel free to check out the Total War: Arena wiki here. There will also be a Twitch stream showing off more gameplay footage tomorrow. Is Total War: Arena something that you think you would be interested in?

Hi I'm Daniel and I'm an aspiring writer, avid gamer, and wanna-be cook; I'm not quite certain in which order. I like all things RPG and if that means swords n' spells, all the better. But, provided it has a good story I'll probably want to try it regardless of what it is. I'm a Windows junkie, and I spend my time gaming on Xbox, PC, and my 2DS.
@@danielcooper179
Previous Destiny’s “House of Wolves” Story Review
Next Oculus Rift faces another legal battle against Luckey Palmer

Total War: Warhammer A Step In The Wrong Direction?

In their 30+ hour Persona live stream today, Atlus has revealed a new trailer that ...