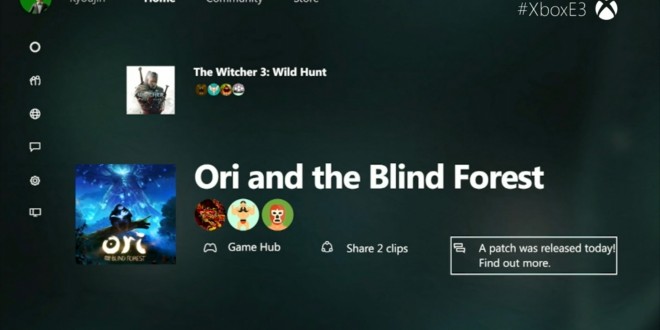 E3 – Xbox One Enhancements and A Newly Unveiled Interface

This year’s E3 has unveiled a host of changes for the Xbox One console. The way we use the console and how it functions will be changing. You’ve probably heard about the proposed 360 backwards compatibility, its Summer Preview program, the Game Preview program, Windows 10 PC streaming, and its partnerships with Oculus and Valve. In a single week we were given access to hundreds of 360 games, given Xbox’s version of an Early Access program, and have seen how the Xbox One will be able to play cross platform with PC and stream to PC and VR headsets. That’s quite a lot for a single week; but Xbox have also unveiled on Xbox Wire their new UI for the Xbox One coming this fall. This new UI will take features from Windows 10 and bring them to the console as a free update. The new UI will bring various changes to the way we interact with the console, but the developers simply want to stress that it will be faster – much, much faster.

The new UI has a completely overhauled look to what we’ve been used to since the Xbox One’s release. It’s focus seems to be to enhance players’ ability to interact with each other while in game. The home screen out-of-game looks a little more convoluted than what we have currently, but without having tried it I may be wrong. You simply have to scroll down to see a list of your most recently played titles and your Pins appear at the very bottom. The quick menu, or “guide” looks to be the focus; they want players to be able to do more while still playing. You can swipe left on the home screen, or double click the Xbox logo on your controller to bring it up. The tab appears on the left side of the screen and takes up some screen real estate, this may irk a few gamers, but allows for a much speedier way to interact with others. If you’re wanting to take a peak at the new UI, the video below goes over several of its most prominent new features.

We’ll also be seeing more of our old Xbox Avatars. They’ll be getting a graphical overhaul and making a more prominent appearance on the Xbox One. They will also be keeping the customizations from the 360, so that’s exciting.

Finally, Xbox One is going to be getting a visit from Cortana. The Windows personal assistant has been jumping to all of Microsoft’s products with Windows 10 so this is no surprise. Cortana will function in much the same way that voice commands do currently. You will be able to call her in game or out of game and ask her to search for things, send messages to friends, or to record your gameplay. If you already use voice commands on your consoles there isn’t all that much new here; however, Cortana will also function across devices. You will be able to set a reminder on your PC or phone (Cortana will also work on iOS, Android, and Windows) and have that reminder pop up on your Xbox One console when you log on. Why? I’m not sure, but you’ll be able to do it. Unfortunately, Cortana will only be coming to the U.S. and the U.K. this fall and will be slowly staggered to other countries. It is also unclear if she will work with Kinect, or with a headset; but hopefully it will work with both considering they now sell the console without a Kinect. We’ll have to wait to find out.

The new UI changes are set to improve upon our experience with the Xbox One. Many, though not all, of the changes are direct results of fan feedback; so, the new UI should please Xbox One gamers. With all of the new changes announced, the Xbox One is certainly shaping up to become much more than it was before.

Hi I'm Daniel and I'm an aspiring writer, avid gamer, and wanna-be cook; I'm not quite certain in which order. I like all things RPG and if that means swords n' spells, all the better. But, provided it has a good story I'll probably want to try it regardless of what it is. I'm a Windows junkie, and I spend my time gaming on Xbox, PC, and my 2DS.
@@danielcooper179
Previous ESO Tamriel Unlimited – Future Content Revealed
Next Pathfinder Online Opens Up 15 Day Free Trial