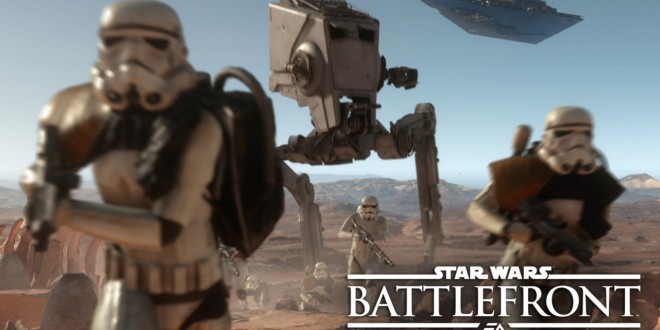 Star Wars Battlefront: You weren’t going to play that campaign anyways…or were you?

The holiday season of 2015 promises a lot for Star Wars fans, especially with the reboot of the much beloved Battlefront series. Of course, by now you probably have heard about all the differences between the old and new versions of the game, especially the lack of a single player campaign. To be fair though, it is stated that you can play the game by yourself if you wanted to, and (according to EA anyways) research data indicates that a single player campaign would most likely be a waste of time and resources.

As much as some of us would like to deny it, technically that data would be correct. The main draw of the new Battlefront game is that it is basically combining the Battlefield series with the Star Wars universe, meaning large scale multiplayer with many vehicles. In that sense, it would be a waste of time to make a campaign, seeing as how it’s entirely possible that you play the campaign maybe two, three, or even four times, and then you forget about it while you play the multiplayer. Even if we disregard the likelihood that at this stage, putting in a campaign would push the release date back, multiplayer in such games generally results in more hours played.

Never tell me the odds…

On the other hand, a single player campaign might set Battlefront apart from all the other shooters that are coming out around the same time. After all, nostalgia can only take you so far, and there will be stiff competition from games that specialize in either single player or multiplayer, but not both. The only game that might have an emphasis on both will be Halo 5, and even then it is a console exclusive and it’s probably going to be more of a multiplayer game within a couple of months anyways.

Plus there’s the fact that all of the trailers and gameplay revealed for Battlefront feature heavily scripted gameplay that is meant to evoke memories of the movies. If EA wants to base their marketing off of putting you in scenes from the movies that are impossible to recreate in a normal multiplayer game, then why not have a gametype that features scripted events, such as a campaign?

Why not guarantee that people would want the game just to play some of the more memorable scenes from the movies (while adding in some oft requested features from fans of the old games) like the 501st’s march on the Jedi Temple? Besides, there’s nothing to lose if you let people experience some of the countless other battles that happened during the rise and establishment of the Galactic Empire.