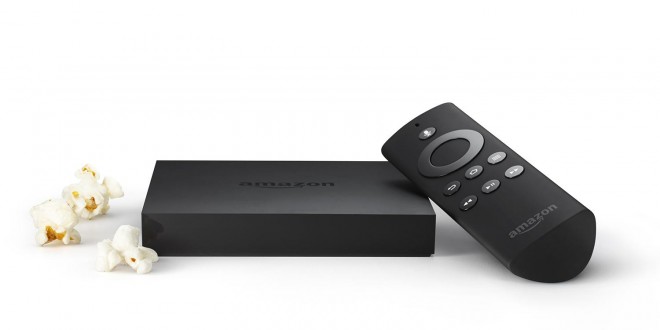 Amazon launched “Fire TV”, an internet-connected TV set-top box as it competes with Apple TV and Google’s Chromecast, to gain a share of the television market. It’s not the first time Amazon launched a hardware device, they’ve done something similar with the Amazon Kindle line.

“It makes sense for Amazon to try to tie everything in to its eco-system and is the logical next step after the success it has had with the Kindle,” said Ovum analyst Jonathan Doran.

Amazon Fire TV is a small black box, allowing consumers to launch content from Amazon’s library, as well other video-on-demand services, directly to their TVs. The device can also be used for gaming, the firm has formed partnerships with gaming firms such as Sega and EA, and promises thousands of Android titles will be available next month.

Good news for those who like to play games on their TV, if you are already a user on Amazon, you can buy a controller for the Amazon console, dubbed Voila, which looks very similar to an Xbox controller. The device comes with a Bluetooth-enabled remote that does not have to be pointed at the TV to work.

“People play games on tablets but they want to play on TV,” said Amazon’s Peter Larsen, at their presentation.

They talked a lot about their new gaming studio as well, saying they are going to make their own games. But the question is, will the device work on other games rather than those made exclusively by Amazon? The message they sent regarding this issue was not very clear, but it wouldn’t be a surprise for the device to work with other games, since they are running an Android system on Fire TV.

Launching a hardware device could be a good idea for Amazon considering the long term potential that could help them sell their digital products. Fire TV is able to stream shows and films from alternatives to Amazon Instant Video like Hulu, WatchESPN, Netflix and HBO Go, there are three main ways that consumers can stream video-on-demand services to their TVs: a dongle, a set-top box or a games console.

Google recently entered the fray with a $35 dongle that plugs into a television’s HDMI port and allows users to stream content from smartphones, tablets and computers, and Apple’s figures indicate it shipped about 10 million of its set-top boxes last year, but Amazon has a lot of its own content to put on such a device also.

Recent research from CIRP revealed that Kindle owners spent, on average, $443 a year more than the Amazon shopper who does not own a Kindle. Users can rent a Kindle e-book each month, access its video library and obtain free one-day shipping on items sold via the Amazon website.

“All of the technology companies are building infrastructure to connect to the new economy forming around television so that people can watch what they want, when they want in a seamless way”, said Jay Fulcher, chief executive of online video tech specialists Ooyala.

At the price of only $99, what can Fire TV do that other competing devices can’t? Some of the things Amazon emphasized in their presentation are the speed and the ease of use of the device. But the most attractive feature of the device is that it has voice command, allowing you to speak into the remote that has a microphone incorporated and that will react very quickly and accurately. Another thing would be the presence of parental control. Parents can pay a little extra to know exactly what shows are appropriate for their children and let them enjoy choosing what they like to see most.

I’m Load The Game’s co-founder and community manager, and whenever I’m not answering questions on social media platforms, I spend my time digging up the latest news and rumors and writing them up. That’s not to say I’m all work and no fun, not at all. If my spare time allows it, I like to engage in some good old fashioned online carnage. If it’s an MMO with swords and lots of PvP, I’m most likely in it. Oh, and if you’re looking to pick a fight in Tekken or Mortal Kombat, I’ll be more than happy to assist! Connect with me by email markjudge (@) loadthegame.com only
@@MarkJudgeLTG
Previous HTC One M8 vs HTC One – New vs Old, Top-tier vs Affordable
Next Doom 4 beta will only be available for next-gen consoles and PC