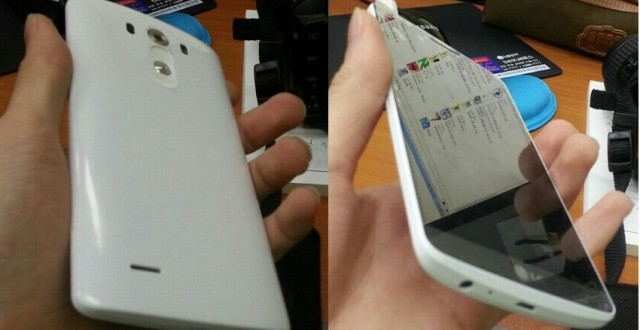 There has been a lot of talk about the LG G3 lately, the device will only be released later this month but we already know a great deal about it. Until recently, most of the information we had was based mostly on rumors and a couple of blurry pictures. Two more images have surfaced on the Korean website Seeko which show the LG G3, fortunately the photos are very clear this time and we can see the smartphone in all of its glory.

The LG logo doesn’t appear on the back of the device so we assume this must be a prototype, aside from that it looks exactly like it did in the previously leaked image. The G3 seems to be a little bigger than its predecessor, on the upside it will also be a somewhat thinner. Seeko also mentioned that a reliable source shared information about the specs with them, they seem to match almost perfectly to those that were rumored by other sources.

People that know a lot about smartphones usually know what to expect from a device before it’s released, but it doesn’t hurt to check some more sources anyway. This particular source claims that the LG G3 will come equipped with a 5.5-inch QHD display, 2.560 x 1.400 resolution and 534 pixel density. The device will be available in two models, one with 16GB storage memory and 2GB RAM, while the other will feature 32 GB storage and 3 GB RAM. Both versions will also come with a microSD card slot for additional storage.

So far, this matches with what we previously believed to be the G3’s specs, the 13 MP rear camera with Optical Image Stabilization was confirmed as well. The battery capacity will only be set at 3.000 mAh, a bit smaller than previous rumors suggested. There is no word on the processor yet, however it’s believed that the LG G3 will sport a 2.5 GHz Quad-core Snapdragon 801 but we’ll have to wait and see if it turns out to be true. The device also comes with a rear-mounted speaker and will probably run on Android 4.4 KitKat.

Overall, these leaked specs look to be almost identical to what we already knew with the exception of the battery, the megapixel count on the camera also seems to be a bit smaller than we would have liked. The LG G3 will be unveiled on May 27 and from what we can tell it looks ready to compete with the big boys of the smartphone world. With the Samsung Galaxy S5, HTC One M8, and Sony Xperia Z2 already out it’s going to be a pretty difficult battle for the G3 but we believe it will manage.

I’m Load The Game’s co-founder and community manager, and whenever I’m not answering questions on social media platforms, I spend my time digging up the latest news and rumors and writing them up. That’s not to say I’m all work and no fun, not at all. If my spare time allows it, I like to engage in some good old fashioned online carnage. If it’s an MMO with swords and lots of PvP, I’m most likely in it. Oh, and if you’re looking to pick a fight in Tekken or Mortal Kombat, I’ll be more than happy to assist! Connect with me by email markjudge (@) loadthegame.com only
@@MarkJudgeLTG
Previous Project Legion coming to PC, developed by the creators of Dust 514
Next Android games you should try!