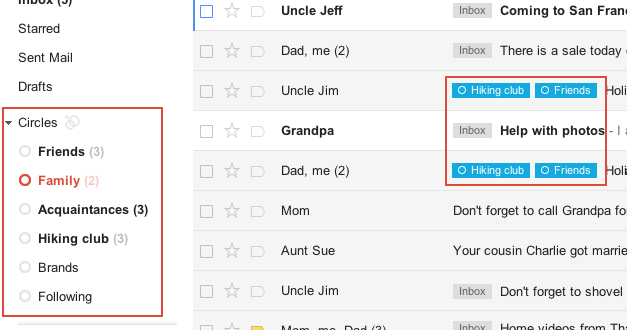 Leaks showed that Gmail is going through a major change in regards to the webmail client interface. Screenshots now show that Gmail interface changes almost completely, making it look more like Google Plus,  replacing the sidebar with a slide-in panel, moving the “compose” button to the bottom right corner and adding a new, smart feature: reminders.  This way, Gmail will work just like Android reminders apps. Of course, Hangouts has been included in the new interface and Google Now , the latest news software, based on the user’s location, will be present, too.

Other new features include snoozing an email and stars have been replaced with pins. Travel, Finance, Purchases will join the Social, Promotional, Updates and Forums tab that already exists in the old interface.  This way, Gmail will be even more user friendly, social media friendly and very organized. Even though Google Labs has been trying out many layouts until now, but not always used them officially, this interface seems to be kept for the wide public. We enjoy it and look forward to using it soon!

Gmail was launched for the first time on the 1st of April 2004 by Paul Buccheit and open to the wide public on the 7th of February 2007. Since then, the free web email app attracted  an incredible number of users, being free and very user friendly.  In June 2012, Gmail has 425 million users, but numbers have increased since that time.  It is available in 57 languages and it initially offered a storage capacity of 1 GB per user. After a period of time, the storage capacity increased to 2 to 4 GB and up to 25 MB for Gmail messages and attachments.  On the 24th of April 2012, Google announced a free storage increase from 7.5 GB to 10 and counting, through Google Drive.

I’m Load The Game’s co-founder and community manager, and whenever I’m not answering questions on social media platforms, I spend my time digging up the latest news and rumors and writing them up. That’s not to say I’m all work and no fun, not at all. If my spare time allows it, I like to engage in some good old fashioned online carnage. If it’s an MMO with swords and lots of PvP, I’m most likely in it. Oh, and if you’re looking to pick a fight in Tekken or Mortal Kombat, I’ll be more than happy to assist! Connect with me by email markjudge (@) loadthegame.com only
@@MarkJudgeLTG
Previous 5 million people downloaded new time-waster called 100 Balls
Next Microsoft drops the price for Xbox One