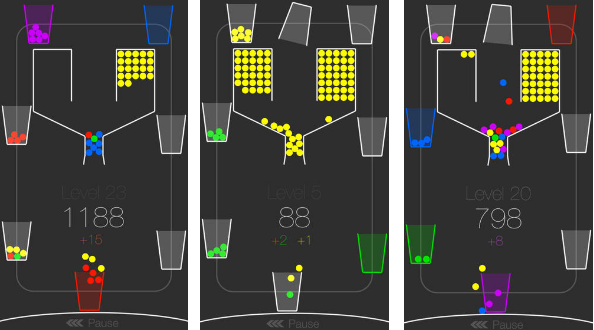 A new free app in App Store became viral among amateur gamers who enjoy playing on their smartphones when bored. After Candy Crush invaded almost every smartphone with sugar and sweets and numbers were getting bigger and bigger in Threes, the new app remains as simple to use as the ones mentioned earlier.  A simple tap of a finger fills cups up with colorful balls.

The games was created by a Lithuanian app developer, Giedrius Talzunas and it consists of a funnel which contains 100 yellow balls and a belt of transparent cups moving from the right to the left, slowly. The player must release the balls into these cups, in order to gain as many points as possible. As the levels go up, the belt speeds up and different colored cups are introduced.  If the player misses a cup, the balls will be lost forever from the collection.

Flappy Bird was built based on the same annoying mechanism that makes it impossible to quit the game sometimes. The app developer informed that he tried to create something minimalistic and that can be operated using one hand. The game has been downloaded more than 5 million times from countries like the US, UK, Mexico, France, Germany and Ireland. The profit has not been revealed by the creator of it, but we can imagine that his budget right now is quite impressive. Of course, no one expects 100 balls to be as successful as other time wasters like Candy Crush, but it has become addictive enough to attract more games like this on the market.

Cheats and tips already exist in the App Store under other applications and 100 balls’s popularity can be also compared to apps like Piano Tiles or Trivia Crack. Let’s say that the name of the game also plays an important role in its success.

I’m Load The Game’s co-founder and community manager, and whenever I’m not answering questions on social media platforms, I spend my time digging up the latest news and rumors and writing them up. That’s not to say I’m all work and no fun, not at all. If my spare time allows it, I like to engage in some good old fashioned online carnage. If it’s an MMO with swords and lots of PvP, I’m most likely in it. Oh, and if you’re looking to pick a fight in Tekken or Mortal Kombat, I’ll be more than happy to assist! Connect with me by email markjudge (@) loadthegame.com only
@@MarkJudgeLTG
Previous BlackBerry is working on a new 4.5-inch display smartphone
Next New Gmail interface looks like Google Plus

Next month in Barcelona, the Mobile World Congress event will be held. Samsung is usually ...