Bitdefender has proven time and time again to be one of the most efficient security solutions around. Total Security 2014 edition not only offers solid antivirus protection, but also comes with a wide variety of useful features and tools. They range from Antispam filter and Wallet to File Encryption, and many more. This particular version of Bitdefender is the most expensive, but also the most complete one so it’s well worth spending the extra bucks. For only $79.95 you can get a one year subscription plan for up to three PC’s, a very good deal considering how much it has to offer.

Getting Bitdefender Total Security 2014 up and running is very simple, but it does require a bit of patience because the setup process involves two steps. The first step requires you to download the suite’s executable file and then wait for the automatic scan, which starts immediately after the download is complete. This scan is done in order to make sure that Bitdefender is being installed on a clean system. As soon as the scan is complete, the setup resumes and the remaining files will be installed. This whole process can take anywhere between 10 and 15 minutes, depending on the system.

The widget is found in the bottom right corner by default, but can be moved around.

Once the program is good to go, you will be greeted by Bitdefender Total Security’s highly intuitive and user-friendly interface. Here you can find all the useful features and tools that come included with the suite. One of the first things you’ll probably notice is the security widget, which appears in the bottom right corner by default. The widget provides a quick way for you to monitor Bitdefender’s scanning and firewall activity and it also allows for fast access to MyBitdefender account. In case you’re not particularly fond of widgets on your desktop, you can always turn it off and open the main interface window instead.

The Antivirus module does pretty much what you’d expect, it gets rid of all the malware that’s plaguing your system. It also prevents viruses and other malicious software from infecting your computer. Tailoring it to your liking can be done by clicking the gear icon and tinkering with the Shield, Vulnerability, Exclusions, and Quarantine tabs. Furthermore, the Antivirus also features a Scan Dispatcher which initiates scans only when system resource usage falls below a certain threshold.

This way, Bitdefender Total Security 2014 does not interfere with user-initiated actions and does not slow down your system at all. The Antivirus gives you the possibility of choosing from a variety of manual scans, such as Quick Scan, System Scan, and Vulnerability Scan. On the other hand, you can just enable Auto Scan mode, which scans for malware automatically and uses a very limited amount of resources. 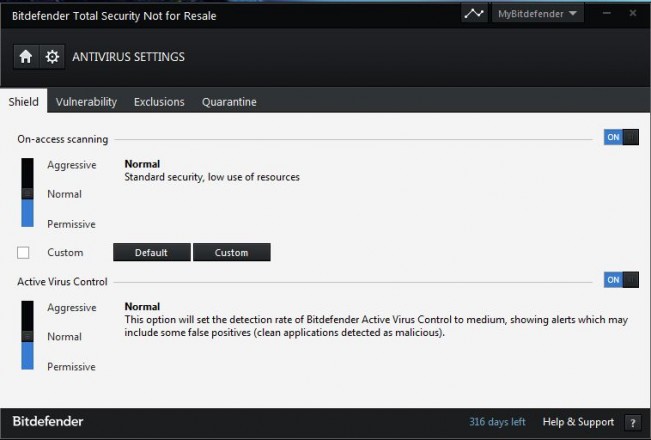 Bitdefender offers a variety of Antivirus Settings for you to tinker with.

Meanwhile, if you were looking for a way to securely store important files online, Bitdefender has got your back. The Safebox feature is a secure online storage and synchronization solution that’s integrated with Windows Explorer. You can access and manage all of the stored files directly from your iPhones, iPads, Android phones, and PCs even if they don’t have Safebox installed on them. The first 2GB of storage are free of charge, but you can go up to 60GB if you purchase an upgrade for $89.95 a year.

We’ve talked about Total Security’s features, but now let’s take a look at some of its tools as well. Tuneup provides you with a variety of tools for monitoring and improving the performance of you system and as such will be particularly valuable to gamers. The optimization tools include PC Clean-Up, Disk Defragmenter, Duplicate Finder, Registry Cleaner, and Registry Finder. All of these ensure that your computer gets that extra bit of performance boost which can make a big difference in certain situations. 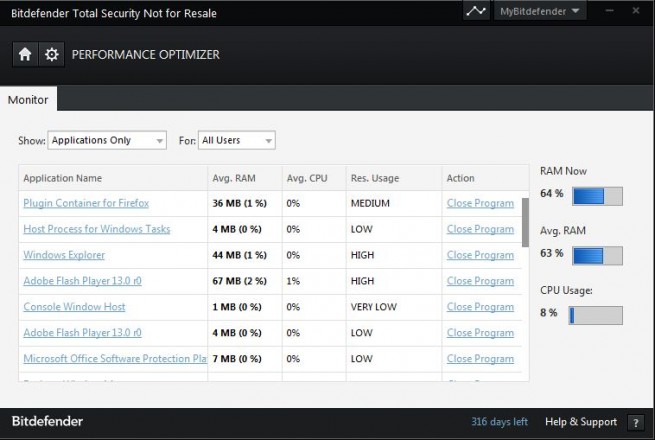 The Tuneup tool allows you to optimize the performance of your system.

Gamers will be happy to know that Bitdefender Total Security also offers a very useful Game Mode. The module activates automatically as soon as you start playing a game, and disables scans, updates, and low-priority system processes. This frees up some of the computer’s resources, which are then used to improve the performance of your games. Switching back to User Mode will be done automatically and without any hassle once you have exited the game.

In case you don’t feel like constantly managing and tinkering with all of these features, Bitdefender offers an Autopilot mode. If you switch this setting on, the suite automatically does all the work for you and switches the most important features to their optimal settings. Furthermore, you can choose not to keep an eye on Bitdefender at all if you wish, and still know that it’s doing a good job. How do you know this? Well, you just look at the new Security Report feature, which presents your overall security status once a week, and recommends ways of fixing any possible issues. 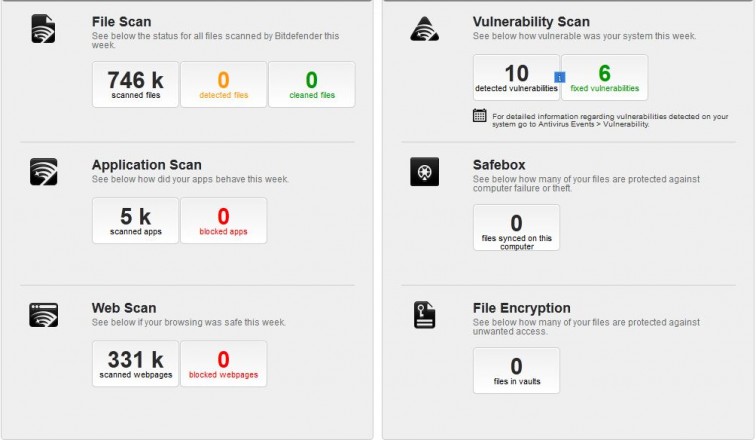 The Security Report presents your overall security status on a weekly basis.

Among the new features that have been added to the 2014 edition of Bitdefender Total Security, we find the Wallet. This is used to encrypt and store all of your personal information, bank account numbers, and websites credentials. Since we’re talking about online privacy and security, we must also mention Safego. This feature links directly to your Facebook profile and scans your News Feed for any infected items. 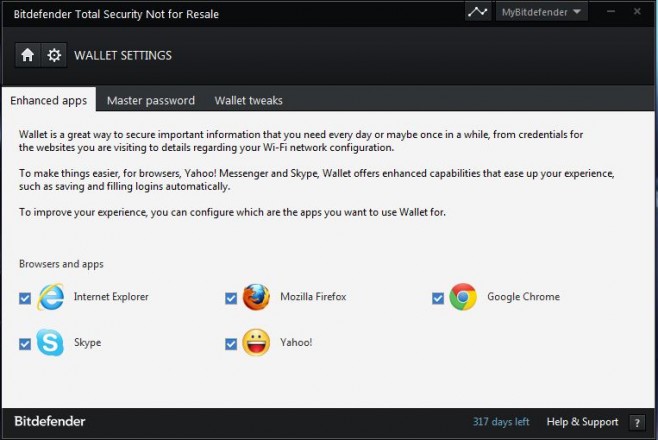 The Wallet is one of the new features that comes with the 2014 edition of Bitdefender Total Security.

The Privacy feature, which can be located on Bitdefender’s dashboard offers everything you need to keep your files completely secure. Here you can find settings for protection against fraud, protection against phishing attempts, data protection, chat encryption, and SSL scanning. The feature also includes a File Shredder, which means that you can safely dispose of any unwanted documents.

The last privacy feature, called File Encryption lets you create a password-protected folder in which you can securely store your confidential documents. This folder, or ‘vault’ can be adjusted to any size you want, and can be locked in order to protect your data. 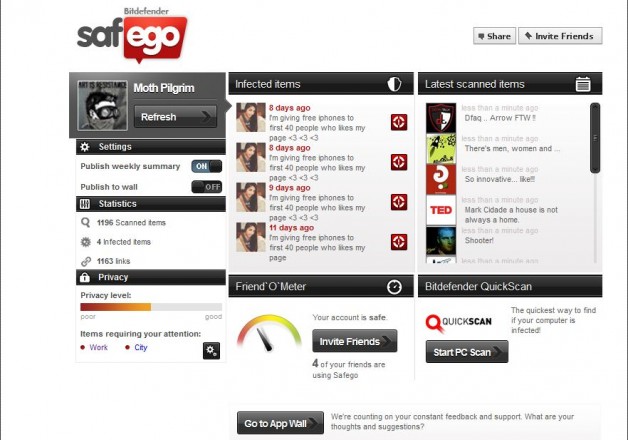 Safego warns you about any suspicious activity found on your Facebook News Feed.

This year’s edition of Bitdefender Total Security comes with Enhanced Parental Controls, which add some more features to the already impressive array that was previously available. The technology has been redesigned to support all Windows operating systems, including Windows 8 and Windows RT. In any case, the basic idea behind parental controls has remained the same. Users are able to create profiles for their children and select the devices and websites that they can visit. The blacklist option allows you to completely block websites(including Facebook), apps, and emails that you don’t want your child to access.

Bitdefender has been one of the top antivirus software’s for a very long time now, and the Total Security 2014 suite continues this successful run. Aside from being one of the most efficient and non-intrusive security solution, Bitdefender actually improves the performance and speed of your system with the help of the integrated Photon Technology. The latest AV-Tests results show that Bitdefender has the lowest impact on performance compared to other similar products such as Kaspersky, Norton, ESET or McAfee. This is all thanks to the Photon Technology, which was first integrated into Bitdefender last year and is part of its Cloud Security.

I have encountered very few problems while testing Bitdefender Total Security on my machine for the last couple of weeks. The antivirus slightly slowed down my system only during in-depth scans, however the impact on the overall performance was barely noticeable. I’m particularly happy about this aspect as most of the other security solutions I’ve tested slowed down my computer quite a bit when performing scans. On top of not having a negative impact, Bitdefender actually helped increase the performance of my system, which is not something I can say about other antivirus software. 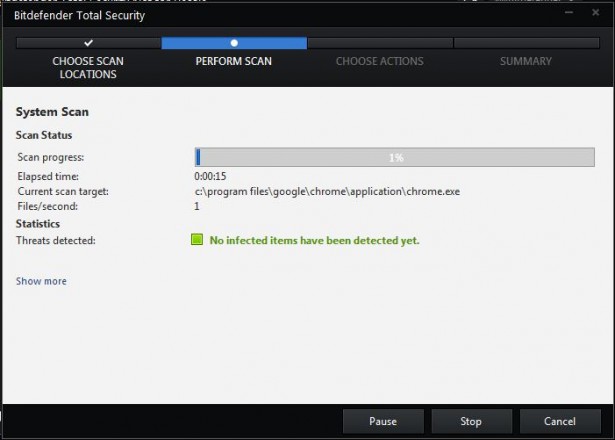 Furthermore, it’s hands down the most non-intrusive security suite I’ve ever seen. Bitdefender Total Security doesn’t bother you with annoying pop-ups, unnecessary alerts or loud noises. You might even forget it was there in the first place, but rest assured that it doesn’t forget about you or the protection of your computer. The features I found to be the most useful are the Game Mode and Tuneup. The tools I found there were very helpful, especially the Disk Defragmenter, which is light years ahead from the one incorporated into Windows.

Still, there are a few features that I didn’t particularly find to be useful, but that’s only because I didn’t need them, not because they weren’t any good. In fact, everything included in the Bitdefender Total Security 2014 package is very solid. I’m sure many customers will be able to take full advantage of this excellent product. The price of $79.95 might seem a little expensive to some, but keep in mind that you will get to enjoy the security suite for one whole year and its available for up to three computers. I wholeheartedly recommend Bitdefender Total Security to anyone looking for the best antivirus software currently available on the market.

You might run into a couple of hiccups once in a while, but overall this is one excellent package that includes some very useful features and tools. Bitdefender Total Security 2014 proves to be the best antivirus suite around, however there is still some room for some improvements.

I’m Load The Game’s co-founder and community manager, and whenever I’m not answering questions on social media platforms, I spend my time digging up the latest news and rumors and writing them up. That’s not to say I’m all work and no fun, not at all. If my spare time allows it, I like to engage in some good old fashioned online carnage. If it’s an MMO with swords and lots of PvP, I’m most likely in it. Oh, and if you’re looking to pick a fight in Tekken or Mortal Kombat, I’ll be more than happy to assist! Connect with me by email markjudge (@) loadthegame.com only
@@MarkJudgeLTG
Previous The Evil Within brought closer to Halloween
Next LEGO Batman 3 goes Beyond Gotham with Debut Trailer

A British company that goes by the name of BladeRoom has filed suit against Facebook ...