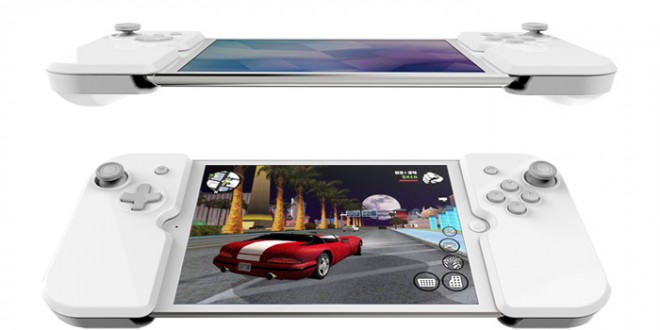 Wikipad are bringing a snap on controller to the iPad Mini called the Gamevice. The MFi controller attaches to the Apple tablet, bringing more traditional gaming controls to the tablet. The full specifications include dual analog sticks, triggers, a d-pad, four face buttons and shoulder buttons. From looking at the picture you will probably have noticed the similarity between the controller and the Wii U GamePad. Despite the App Store having a huge number of games there has been very little support in the way of quality attachable controllers. While gaming on tablets is becoming more mainstream many still feel that touch controls are not suitable for all titles and limit the variety of games that can be brought to the market. Peripherals such as Gamevice could eventually lead to tablets becoming fully-fledged portable gaming systems.

The Gamevice was first announced in January, although that incarnation of the device was said to be designed for use with Android and Windows 8 tablets. iOS support was something that the developers were hoping to add in the future. However, the website for the controller attachment indicates that the Gamevice is now an iPad Mini exclusive and doesn’t specify whether it will ever see a release on Android and Windows devices in the future.

This isn’t Wikipad’s first foray into the tablet peripheral business. They first released the Wikipad 7 in 2013, a gaming focused tablet that ran on Android. Its features included an attachable gamepad and a 7-inch display. While it released to some positive reception it did not sell very well, possibly due to the lack of games that could take advantage of the technology on the Play Store.

As well as the announcement for the Gamevice, Wikipad have also gone into detail about a new partnership with OnLive that will bring triple-A releases available on the service to their devices.  The official website for the Gamevice doesn’t give a specific release date, instead saying that it will be “coming in 2014.”

Freelance writer with a love for gaming. Have owned pretty much every console and handheld from the last 15 years. When I'm not writing about games, which I am most of the time, I tend to be reading, writing about sport, binge watching shows on Netflix...or playing the odd video game.
@nathanpgibson
Previous Wii Fit U update out today
Next Dragon Ball Xenoverse coming to PS4 and Xbox One