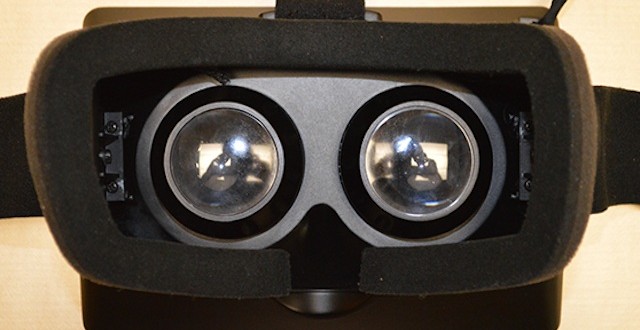 Reports about Samsung’s virtual reality headset first surfaced about a month ago and revealed that the Korean company is developing the device in collaboration with the Oculus VR team. The headset is being called the Gear VR and is said to be somewhat different than other virtual reality devices such as Sony’s Project Morpheus or Facebook’s Oculus Rift. While the latter are now compatible with the PS4, Xbox One and PC, Samsung’s headset is being developed to only work with its own handsets. Rumor has it that the Gear VR is already being tested on current flagships like the Galaxy Note 3 and Galaxy S5, but will require next-gen devices once it releases.

A new report by Sam Mobile says that Gear VR will launch at the IFA 2014 Trade Show in Berlin together with the Samsung Galaxy Note 4. The article also provides a few more details like the fact that a Galaxy device will be able to dock into the Gear VR through a 3.0 USB port. Samsung’s headset will reportedly not be equipped with any sensors and the virtual reality effect will be achieved through head tracking using a smartphone or tablet’s accelerometer, gyroscope, and processing power. An interesting feature that differentiates it from the Oculus Rift and Project Morpheus headsets is the see-through button.  This will offer the user a real-time feed of the real world, which means that they wont have to keep removing the device when switching between reality and VR.

The Gear VR doesn’t seem to feature too much in terms of hardware given that it mostly relies on the device it’s connected to. This could mean that Samsung might release it at a relatively cheap price, but we’ll have to wait and see. Apps such as Theatre, 360 Player, and Gallery will apparently be available at launch and the SDK will be available to developers shortly after the IFA announcement. Interestingly enough, the company will most likely also launch a Google Glass competitor at the Berlin event. Not much is known about this device at the moment only that it will be called Gear Glass.

While the Gear VR and Gear Glass definitely sound interesting, I think the event’s main attraction will probably be the Samsung Galaxy Note 4. The latest word on the street is that the phablet will offer the same color selection as the Galaxy S5, meaning charcoal black, shimmery white, copper gold, and electric blue. The IFA 2014 is scheduled to take place during September 5th-10th in Berlin.

I’m Load The Game’s co-founder and community manager, and whenever I’m not answering questions on social media platforms, I spend my time digging up the latest news and rumors and writing them up. That’s not to say I’m all work and no fun, not at all. If my spare time allows it, I like to engage in some good old fashioned online carnage. If it’s an MMO with swords and lots of PvP, I’m most likely in it. Oh, and if you’re looking to pick a fight in Tekken or Mortal Kombat, I’ll be more than happy to assist! Connect with me by email markjudge (@) loadthegame.com only
@@MarkJudgeLTG
Previous LG G Pad 10.1 to Arrive in the US – Specs and Release Date revealed
Next Blizzard reveals pricing for Curse of Naxxramas – A Hearthstone Adventure