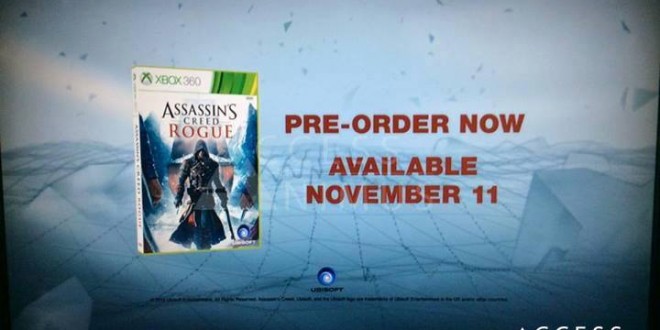 Last week we first heard about something called Assassin’s Creed Rogue when the name was mentioned by a Swiss retailer. It seems the retailer was actually on to something as more information about this game has arrived today courtesy of Access the Animus (via Eurogamer). The images posted on that Facebook page seem to have been taken from the leaked trailer you can see above. The source of the leak is unknown but we can only assume that it came from one of the Spanish speaking countries as the video shows and the message “cargando” several times, which means “loading” or “buffering”. At any rate, the trailer does look genuine even though the quality isn’t the best.

Assassin’s Creed Rogue was previously known as Assassin’s Creed Comet and will only be available for Xbox 360 and PS3. Rumor has it that you will be playing as a Templar who goes by the name of Shay. Templars have been the main antagonists since the beginning of the series so the new name is definitely more fitting given that you’ll be playing one that essentially went rogue. The trailer reveals that at least one of the locations we’ll be able to visit will be somewhere in the Arctic. We can only imagine that you’ll need a ship to get there so ship-based gameplay will return, just as it was previously rumored. It is also believed that the game is set in the year 1758 and you will get to sail the Atlantic Ocean and visit several locations along the coasts. New York is said to be one of them.

The trailer reveals right at the end that Assassin’s Creed Rogue is already available for pre-order, but it doesn’t mention any retailers. However, it’s very likely that this is not actually the case as the trailer wasn’t meant to be showed just yet. It’s probably safe to assume that Ubisoft planned on making the announcement at Gamescom, but someone managed to spill the beans ahead of time. Interestingly enough, Assassin’s Creed Rogue looks to have been completed for a while and Ubisoft even had time to develop some DLC. As seen in the video, one of these is called “The Ultimate Hunter Pack” and seems to offer some customization options for both your character and your ship. Another one goes by the name of “The Siege of Fort De Sable Mission” and will probably be offered as a pre-order bonus.

I’m Load The Game’s co-founder and community manager, and whenever I’m not answering questions on social media platforms, I spend my time digging up the latest news and rumors and writing them up. That’s not to say I’m all work and no fun, not at all. If my spare time allows it, I like to engage in some good old fashioned online carnage. If it’s an MMO with swords and lots of PvP, I’m most likely in it. Oh, and if you’re looking to pick a fight in Tekken or Mortal Kombat, I’ll be more than happy to assist! Connect with me by email markjudge (@) loadthegame.com only
@@MarkJudgeLTG
Previous Windows smartwatch design leaked
Next Gmail scanned for child abuse evidence