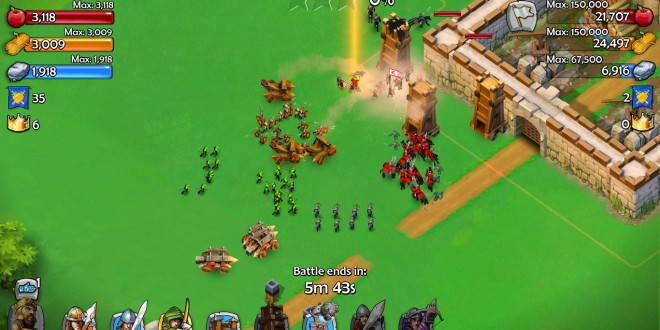 Microsoft announced that they will release a new “Age of Empires” game, called “Castle Siege”, for Windows 8 and Windows Phone 8 devices. The game will be available starting September 2014 exclusively through digital download from the Windows Store.

The developer states that, during the game, players will be able to select one of the several available civilizations and expand their castle in a massive city. Afterwards, gamers can defend their walls against attacking empires or, once their army is ready, attack other castles built by online opponents. Microsoft ensures that Castle Siege is built so users can enjoy the expansiveness of an Age of Empires game on the go, with the speed and simplicity of touch-based technology. Players will be able to drag paths on the touchscreen to command their units in battle, this being a crucial feature, needed to achieve victory.

Players will also be able to forge alliances and compete against other alliances through Xbox Live. One special feature of the game is the possiblity of deploying heroes, such as Richard the Lionheart, which will turn the battle in the user’s favor. Another notable thing about the new Age of Empires is the possiblity of cross-platform play on Windows 8 or Windows Phone 8 devices. This means that the same siege can be joined by people playing either on PC’s, phones or tablets running the operating system. According to Microsoft, the game starts off with six civilizations to choose from, including Britons, Teutons and Kieven Rus (from the Medieval Era). Each civilization has up to six unique cultural units. Additionally, gamers can play through 10 historical battles, notably the Siege of Marienburg and the Fall of Constantinople. Microsoft has not announced plans to release this game on any consoles and, considering the fact that touchscreen controls are given such importance, they will probably limit “Castle Siege” to these platforms.

I'm a journalism graduate and an occasional gamer. As a kid I used to own a NES clone called "Terminator 2", which was hugely popular in my country. I like old school games and adventure games but I occasionaly play RPG's and Shooters as well, though I wouldn't call myself an expert at these kinds of games. When I'm not writing or playing games I prefer reading detective or fantasy novels.
Previous The Last of Us patch 1.08 features new weapons, missions, bug fixes and more
Next IFA Berlin and the gadgets we are most excited about