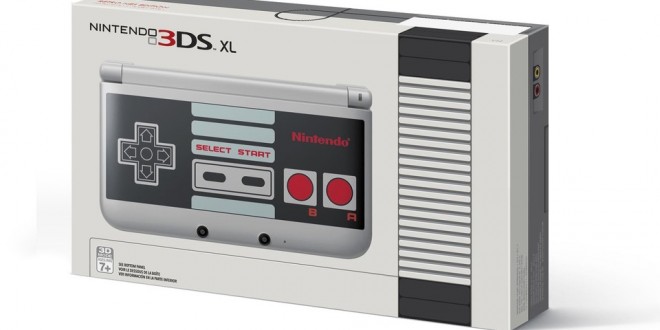 Nintendo and GameStop have teamed up to release three special editions of the 3DS XL in the United States. The Japanese company announced the new models at the GameStop Expo in California.

One of these models is the red and blue Super Smash Bros edition, which is going to be released on September 19. Another edition is based on the NES console, the device that launched Nintendo in the gaming business. The design is actually of a NES controller, while the box looks like the console itself. The NES edition will be released on October 10. Last but not least, a Persona Q edition will be released along with the “Persona Q: Shadow of the Labyrinth” game, on November 25. The NES and Persona Q editions of the 3DS console will only be available at GameStop, as part of an exclusivity deal. These new 3DS models will cost $200.

GameStop director of merchandising Michael Turner expects high demand for the new 3DS designs. He also stated that people who want the consoles can now pre-order them. The Persona Q and Super Smash Bros models are made for the purpose of promoting the respective games. However, the NES version counts on nostalgia to sell more units. This said, Turner’s expectations regarding the demands for the Japanese company’s 3DS console are at least realistic.

Apart from the new designs, Nintendo is also releasing the New 3DS and New 3DS XL handhelds in Japan, in October 11. The new devices will feature an extra direction button, trigger buttons, as well as Near Field Communication support. It will also have a faster processor, required by the newer games. This will pose a problem for those who choose to purchase the special 3DS designs because they will spend their money on a console that will not support newer games.

I'm a journalism graduate and an occasional gamer. As a kid I used to own a NES clone called "Terminator 2", which was hugely popular in my country. I like old school games and adventure games but I occasionaly play RPG's and Shooters as well, though I wouldn't call myself an expert at these kinds of games. When I'm not writing or playing games I prefer reading detective or fantasy novels.
Previous Surface Pro 3 receives update – problem solved.
Next Nokia and Windows Phone brands schduled to disappear this Holiday