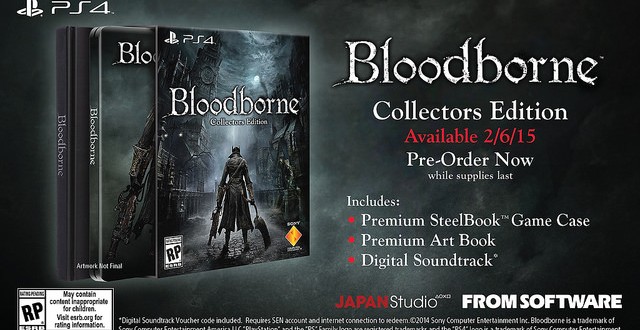 Back at E3 2014, From Software and Sony unveiled what can only be described as the spiritual successor to Dark Souls and Demon Souls. This PS4 exclusive title is called Bloodborne and it’s what everybody has been talking about since the grand reveal. During the Tokyo Game Show 2014 it was announced that the game will be launched on February 6th, 2015 and we also learned about the Bloodborne Collector’s Edition. This special edition comes out on the same day as the game and includes a Steelbox collector’s case, an exclusive premium art book jam packed with beautiful concept art and the original soundtrack. The Collector’s Edition is available for pre-order for the price of $80, but you might want to hurry if you’re interested as it will only be available in limited quantities.

Sony also mentions that if you pre-order the Collector’s Edition or the regular game you will receive a DLC that gives your Messenger an alternate skin. The Messenger is a companion pet that facilitates some of the online features. Speaking of which, Bloodborne will have an Alpha phase soon aimed at improving the game’s online component. From Software didn’t announce a specific date, but invites for this test have started rolling out a couple of days ago so presumably we won’t have to wait long to see it. The company warns us that “players may experience bugs and incomplete features”, but this is to be expected from a game in its Alpha phase.

Aside from announcing the release date and Collector’s Edition, Sony also launched a new gameplay trailer for Bloodborne at the Tokyo Game Show 2014 and it’s incredibly epic. The trailer showcases some new weapons, monsters and various hunter outfits so go ahead and check it out below. Stay tuned as we bring you all the latest news and updates.

I’m Load The Game’s co-founder and community manager, and whenever I’m not answering questions on social media platforms, I spend my time digging up the latest news and rumors and writing them up. That’s not to say I’m all work and no fun, not at all. If my spare time allows it, I like to engage in some good old fashioned online carnage. If it’s an MMO with swords and lots of PvP, I’m most likely in it. Oh, and if you’re looking to pick a fight in Tekken or Mortal Kombat, I’ll be more than happy to assist! Connect with me by email markjudge (@) loadthegame.com only
@@MarkJudgeLTG
Previous 20 new minutes of Metal Gear Solid V reveal its jungle
Next Nexus 6 vs iPhone 6 – flagships head to head