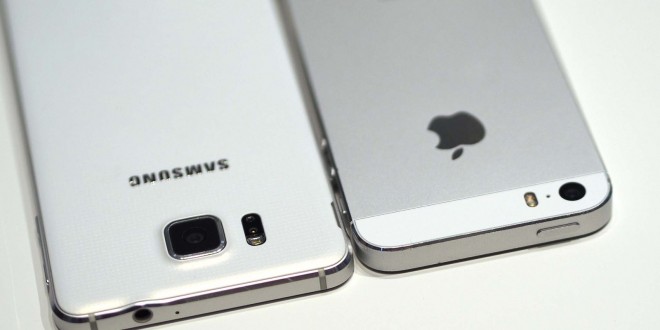 The iPhone 6 and iPhone 6 Plus have just been launched and Apple has already sold over 10 million units all around the world, just in the first weekend of sales. The Galaxy Alpha was launched around the same time, but naturally it didn’t enjoy such a big success. The iPhone 5S however, was launched in September 2013 to a pretty enthusiastic crowd. While the iPhone 5S didn’t beat the record in sales, it still sold millions of units all around the world and quickly became one of the most popular handsets on the market. Even though the iPhone 6 and 6 Plus are already up for sale, many of you might be wondering whether the iPhone 5S would suffice for their needs. Since the newly launched iOS 8 is also available for the iPhone 5S, bringing all the features on the iPhone 6, except Apple Pay, since the iPhone 5S doesn’t have an NFC chip included.

iOS 8 is the best version of iOS so far, and it borrows quite a few features Android users have been accustomed to for a few years now. Compared to Android 4.4 KitKat and the upcoming Android 5.0 Lollipop, iOS 8 is pretty next-gen, but it can’t surpass the increased customizability and features in the Android operating systems. Nonetheless, iOS 8 brings features iPhone 5S users had long been waiting for, such as third-party keyboards, actionable notifications, customizations, and widgets in the notification center, alongside many others. Check out our iOS 8 vs Android 5.0 Lollipop review if you want to know more about the two latest mobile operating systems. The Galaxy Alpha should be getting Android 5.0 Lollipop in the following months.

Let’s get right to it, though. The iPhone 5S design includes an aluminium unibody with rounded edges and solid build. The Galaxy Alpha design only includes a metal frame and a plastic back panel. That is still an improvement compared to the Galaxy S4 or Galaxy S5, but it doesn’t live up to the full-metal body of the iPhone 5S. Both the Galaxy Alpha and iPhone 5S have fingerprint sensors embedded in their respective home buttons. The TouchID on the iPhone 5S tends to work a bit better than the sensor on the Galaxy Alpha, but Samsung has considerably improved the technology on its phones. Both the iPhone 5S and Galaxy Alpha have their speakers on the bottom, which is unfortunate placement, especially if you tend to use your phone in landscape mode and can accidentally cover the speakers.

The iPhone 5S display, even though it has a smaller resolution than the Galaxy Alpha display, has great pixel density, great outdoor visibility and viewing angles. If you put the displays side to side, the Galaxy Alpha seems just a bit less saturated, but they both reproduce colors accurately, and provide sharp and crisp images for your viewing pleasure. The Galaxy Alpha display does seem brighter than the iPhone 5S, and since it has larger real estate, you can work with it more easily and see things a bit better. The Galaxy Alpha is just as good with outdoor visibility and viewing angles, so your choice here should mostly depend on what size you would like for the display.

The iPhone 5S specs are representative for 2013, with a dual core 1.3 GHz Apple A7 Cyclone ARM v8-based CPU, backed by 1 GB RAM and either 16, 32 ir 64 GB internal storage, no microSD card slot included. The Galaxy Alpha specs include a stronger octa core Exynos 5 Octa 5430 CPU backed by 2 GB RAM and 32 GB internal storage, with no microSD expansion available. While the Galaxy Alpha does have a stronger processor, the iPhone 5s still doesn’t seem slow or laggy whatsoever. Setting aside the issues with iOS 8, which have mostly been resolved with the iOS 8.1 update, the iPhone 5S makes for a great phone in terms of speed and processing power. The Galaxy Alpha does have more to work with, so it will crash or freeze less than the iPhone 5S. That being said, the Galaxy Alpha still seems like a better choice if your are looking for great performance, because it is more future-proof than the iPhone 5S.

The iPhone 5S price sits at around $550 at the moment for the unlocked variant, while the Galaxy Alpha price is around $650 unlocked at various retailers like Amazon and Best Buy. As far as bang for buck goes, the Galaxy Alpha is the clear winner here, with a larger screen, better performance, better camera and brighter display. The iPhone 5S isn’t too bad either, but it is an older phone, to be fair. Nonetheless, the iPhone 5S is known to be sturdy and durable, which means that you will be able to use it for a couple of years and even sell it afterward. Samsung Galaxy phones aren’t known for their durability or re-sale value, so if you plan on hanging on to your next phone for quite some time, the iPhone 5S would suit you. That is, if you don’t mind the large bezels, average camera and restrictions of the Apple ecosystem. I would definitely go for the Galaxy Alpha, because I honestly don’t like the big bezels on the iPhone 5S.

My life-long dream has been to test out every gadget on the market! Considering the fact that I've rapidly destroyed almost every gadget I've had so far, I'm not inclined to owning something, so my ideal outcome would be to have a different gadget each month. I'm really into smartphones, wearables and tablets and I love Playstation and Xbox, I'm sure I'll beat you at your own game (after a month of training... or two)
Previous HTC One M7 vs HTC One M8 – specs, price, design compared
Next Mojang reveals when Scrolls will get out of beta