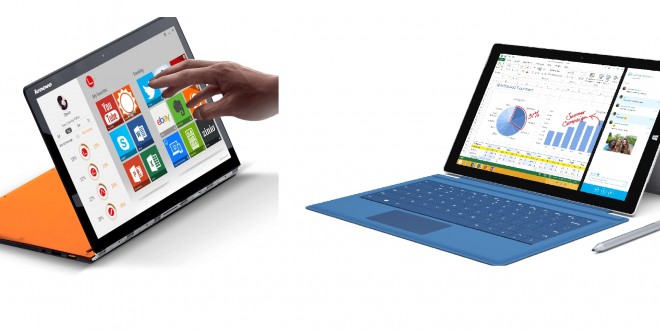 While convertibles aren’t that popular yet, many companies have begun releasing them because they are a great alternative to carrying two different gadgets around. With the Microsoft Surface Pro 3 or the Lenovo Yoga 3 Pro, you have a combination of two devices: a tablet and a laptop in one. The advantage of convertibles like the Surface Pro 3 is that you have less weight and gear to carry around, you can use the device in various modes and it has full desktop integration thanks to Windows 8.1. While there already are many convertibles to choose from, including the Asus Transformer Book T100, Surface Pro 2, Lenovo Yoga 2 Pro and many others, the two latest devices in this category are the Surface Pro 3 and Lenovo Yoga 3 Pro. This short comparison will try to illustrate which would suit what kind of user and why one would be the better choice than the other.

First off, the whole idea of a convertible inherently pleases me, so I probably am biased towards this category of devices. But since we’re talking about two convertibles, the Surface Pro 3 and Lenovo Yoga 3 Pro, my biased nature should be more of an asset than an issue. In any case, there are many advantages to owning a convertible, but price isn’t one. Convertibles tend to be as expensive as full-blown laptops, but mostly because they encompass two different devices in one – a tablet and a notebook. If you are wondering how that would be possible, the premises is simple: detachable keyboard and a touchscreen.

Convertibles are slowly becoming the popular kind of office gear because they facilitate easy commuting, easy task switching and other functions for office and business environments. With the Surface Pro 3 and the Lenovo Yoga 3 Pro, you can easily switch between tablet and laptop. The Lenovo Yoga 3 Pro is the more innovative device, since it uses a watch hinge that allows the device to rotate 360 degrees. That in turn means that you don’t even have to detach the keyboard part in order to use it as a tablet. If you think that it would be a cumbersome task involving a heavy and thick device, don’t worry. The Lenovo Yoga 3 Pro is the thinnest and lightest convertible you can find on the market.

The Surface Pro 3 on the other hand works with a detachable keyboard that has a a similar hinge to to those found on Lenovo Yoga Tablets. It also has a lot of modes for use, including different degrees you can set the hinge to so that you can have the optimal viewing angles. The Surface Pro 3 isn’t as light and thin as the Lenovo Yoga 3 Pro, but it does come close. It has a 12 inch display with a 2160*1440 resolution which offers great brightness, visibility and color accuracy. The Surface Pro 3 measures 292.1mm x 201.4mm x 9.1mm and weighs 800 grams, which is an acceptable weight for a “tablet” this big. The Surface Pro 3 has a 3:2 aspect ratio, which might be bothersome to some, considering that the 4:3 ratio is preferred by most. Nonetheless, I think it’s ideal and doesn’t bother me at all.

The Lenovo Yoga 3 Pro measures 299.72 mm x 228.6 mm x 12.7 and weighs 450 grams, making this convertible the lightest and thinnest one around. While it is bigger than the Surface Pro 3, the Lenovo Yoga 3 Pro is still easy to carry around thanks to its thin and light chassis. It also has vibrant color options like clementine orange, which are among my favorite parts about the Yoga 3 Pro. The device also has a slightly larger 13.3 inch display with a 3200*1800 resolution and has JBL speakers with Waved Audio certification. Not that the Surface Pro 3 doesn’t have enough pixels or a sufficiently big screen, but the Lenovo Yoga 3 Pro does pack a tougher punch.

We already know the most important specs of the Microsoft Surface Pro 3 from the pricing chart above, but we should also mention that the convertible has Bluetooth 4.0 LE, Wi-Fi 802.11ac/802.11 a/b/g/n, digital compass, full-size USB 3.0, microSD card reader, mini displayport, 5 MP rear camera, 5 MP front camera, stereo speakers with Dolby sound, ambient light sensor, accelerometer, magnetometer, gyroscope and comes with a Surface Pen. The Surface Pro 3 does have some overheating issues and an average battery life, but the latest update from Microsoft released a few months ago fixed most of the issues related to overheating and performance. The Surface Pro 3 also had Wi-Fi issues, but those were also fixed by an update since its June 20 release.

The Lenovo Yoga 3 Pro is outfitted with Intel’s new Core M CPU, Intel HD Graphics 5300 and backed by 8 GB RAM and either 256 or 512 GB internal storage. Bluetooth 4.0, Wi-Fi  802.11 A/C, two USB 3.0 ports, DC-in with USB 2.0 function port, 4 in 1 card reader, microHDMI out and the aforementioned JBL stereo speakers are also included in the package. Battery life on the Lenovo Yoga 3 Pro is about 8 hours with light use, which is not that bad. Could have been better, though and  we would have expected better since Lenovo and the Yoga Tablet are famous for their 18 hour battery life expectancy.

Performance-wise, the Surface Pro 3 generally tops the Lenovo Yoga 3 Pro according to most user reviews and benchmarks. The Surface line has been known to be extra-powerful, so we’re not surprised by that. You do have to pay the extra price, though. In case you need a high-end device with top-notch specs, the Surface Pro 3 should be your best bet. But if you want a powerful device that gives you all the mobility of a tablet, the Lenovo Yoga 3 Pro would be the better choice. I personally love the watch hinge on the Lenovo Yoga 3 Pro and would rather spend less on a fanless design with a pretty good performance, but that’s because I don’t use apps like Photoshop or video editing apps which need all the power the Surface Pro 3 can give. Which would you choose if the two of these were presented to you for free?

My life-long dream has been to test out every gadget on the market! Considering the fact that I've rapidly destroyed almost every gadget I've had so far, I'm not inclined to owning something, so my ideal outcome would be to have a different gadget each month. I'm really into smartphones, wearables and tablets and I love Playstation and Xbox, I'm sure I'll beat you at your own game (after a month of training... or two)
Previous Tales from the Borderlands gets a world premier trailer
Next Galaxy Note Edge hanging screen damage addressed by Samsung