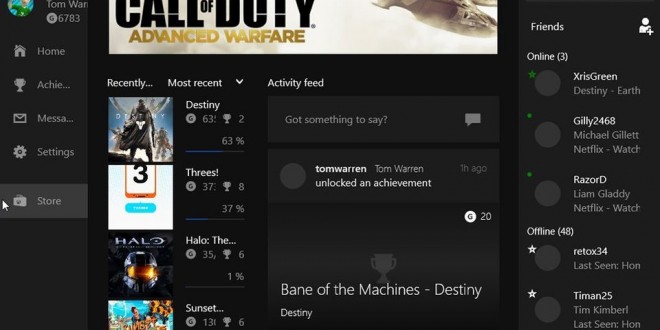 Windows 10 will bring with it a host of new features, many of which have not been announced yet. Others however, are already well known to all, such as the Cortana virtual assistant for example. More recently it was also revealed that the latest version of the operating system will include a feature specifically designed for Xbox gaming. This Xbox app has been made known thanks to a leaked Windows 10 consumer build that gives us a better idea of what to expect for when the next preview launches next month. The app seems to serve the same purpose on the desktop as SmartGlass does on the smartphone. Specifically, you can use it to check out your Xbox 360 or Xbox One achievements, activity feeds, friends lists, and even the store.

The app in question is still early in development according to Microsoft. “We’re still working on it, but we couldn’t wait to give you a sneak peak. We update regularly, so keep checking back to see what’s changed,” reads a note on the Windows 10 preview. Xbox boss Phil Spencer stated last week that Microsoft will soon be ready to “talk about gaming on Windows.” It looks like this is what he was talking about, although an Xbox app is certainly not a feature that PC gamers will likely get excited about. Thus far, the company has done a pretty poor job at supporting the PC community, so let’s hope that Microsoft has some other useful gaming features as well planned for Windows 10.

You will be able to check out the Xbox app, Cortana, and a number of other features next month when the consumer preview is scheduled to be launched. The new Windows 10 preview will be announced at a special press event on January 21st and will presumably become available shortly after. Stay tuned for more news and updates.

I’m Load The Game’s co-founder and community manager, and whenever I’m not answering questions on social media platforms, I spend my time digging up the latest news and rumors and writing them up. That’s not to say I’m all work and no fun, not at all. If my spare time allows it, I like to engage in some good old fashioned online carnage. If it’s an MMO with swords and lots of PvP, I’m most likely in it. Oh, and if you’re looking to pick a fight in Tekken or Mortal Kombat, I’ll be more than happy to assist! Connect with me by email markjudge (@) loadthegame.com only
@@MarkJudgeLTG
Previous eBay Users Selling Anniversary PlayStation 4
Next Mass Effect 4 announcement inbound as Bioware is “pushing hard before the holidays”