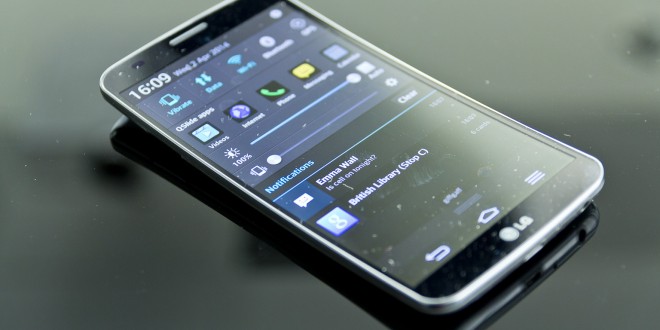 The LG G Flex 2 was probably teased by Qualcomm last week, the Snapdragon-manufacturer hinting at the fact that we would see a Snapdragon 800-powered LG device at CES 2015 in Las Vegas on January 5th. Now, the LG G Flex 2 has been mostly confirmed, but without the Snapdragon 800 CPU. Instead, it seems the curved smartphone will tout the newer 64 bit Snapdragon 810 CPU, which means Android 5.0 Lollipop will be a nice fit for the handset. While flexible smartphones aren’t that popular just yet, the release of LG’s upcoming handset might turn the fad into a full-blown trend in 2015.

A Korean website called Naver has confirmed that the flexible LG handset would finally be introduced at CES 2015, while confirming a few specs of the handset at the same time. According to the site, the LG G Flex 2 will sport the aforementioned Qualcomm Snapdragon 810 CPU and LTE-A as well. From what we gather from around the web, the handset will feature a 5.5 inch display with a 1080p resolution and subsequently be smaller than its predecessor.

Even though we still can’t say LG has confirmed the LG G Flex 2, the handset is pretty much good to go. Naver puts the actual release date of the LG G Flex 2 on January 6th, the second day of CES 2015, so we are giddy to see what else the company has prepared for us at the convention. Previous rumors state that the new flexible handset will have a new hard-rubber chassis that would let the phone bend like no one’s business, while the self-healing coating seen on the LG G Flex will be upgraded as well, to bear even better healing properties. Until CES 2015, we will take these rumors with a grain of salt and hope that the LG G Flex 2 will be an innovative release marking a stepping stone in flexible phone design.

My life-long dream has been to test out every gadget on the market! Considering the fact that I've rapidly destroyed almost every gadget I've had so far, I'm not inclined to owning something, so my ideal outcome would be to have a different gadget each month. I'm really into smartphones, wearables and tablets and I love Playstation and Xbox, I'm sure I'll beat you at your own game (after a month of training... or two)
Previous You can now buy the Huawei Honor 6 Plus for just $400
Next Xiaomi Redmi Note 2 to be unveiled on January 15