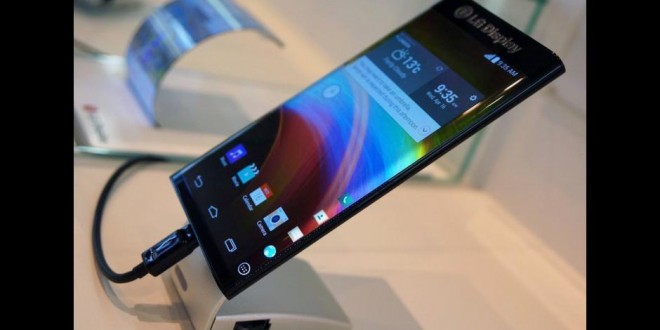 Dual-edge and edge display smartphones are getting more and more popular each day, with offerings ranging from the Galaxy Note Edge to the Xiaomi Arch and even the Galaxy S6, supposedly. OEMs are getting into the trend fast and LG is not staying behind. A dual-edge smartphone was demoed by LG at the CES 2015 exhibition, but you probably didn’t know about it because the exhibition was held behind closed doors, away from prying eyes.

The dual-edge smartphone from the company is but a prototype at this stage, but at least we know that LG is trying to catch up and will be launching such a high-end and innovative device in the future. During the presentation, lucky people found out that LG was working on an Active Bending plastic AMOLED display that does what the Note Edge can, but on both edges, like the Xiaomi Arch. The prototype dual-edge smartphone is supposedly an early model that hasn’t been completely finished yet, so aside from the curved display the handset doesn’t offer anything special. According to reports from participants at the show, the 6 inch display on the device has a 720*1280 resolution, which is pretty average compared to the Note Edge and rumored Xiaomi Arch.

With the unveiling of the dual-edge smartphone from LG, we could assume that once the LG G4 is announced, we might be seeing two different variants, in similar manner to the Galaxy Note 4 and Note Edge duo. While these are just speculations at the moment, the existence of a dual-edge smartphone from LG has been confirmed and we are curious to see what the final prototype will look like. Since the unveiling of the next-gen display wasn’t public, we don’t know much about what stage the development of the technology is so we can’t predict for sure when LG will be finished with a working prototype that has a higher resolution and probably flagship specs. Nonetheless, we can safely assume that we should be seeing the device later this year, even at MWC 2015 in March, when the LG G4 is supposed to be launching.

CES 2015 was great this week, bringing forth lots of new gadgets and introducing new innovative technologies to the public. Even though the majority of exhibits aren’t available for purchase yet, it is good to know that we have smart bikes, an LG dual-edge smartphone, high-end laptops, super-fast power-efficient SSDs and Kodak smartphones to look forward to. I’m sure there were a lot of new devices introduced besides the ones that went public, and we are waiting to hear about them in the future. Until we have confirmation about LG’s new device, stay tuned for more inside news out of CES 2015.

My life-long dream has been to test out every gadget on the market! Considering the fact that I've rapidly destroyed almost every gadget I've had so far, I'm not inclined to owning something, so my ideal outcome would be to have a different gadget each month. I'm really into smartphones, wearables and tablets and I love Playstation and Xbox, I'm sure I'll beat you at your own game (after a month of training... or two)
Previous Dragonball Xenoverse release date changed, but not in all regions
Next Dota 2 gets its first update of the year