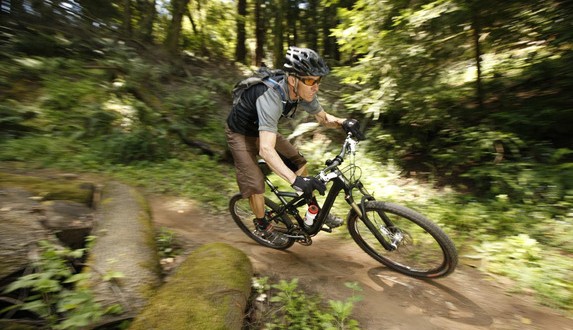 The Ebove smart bike from Activetainment is like virtual reality exercising

When it comes to CES 2015, if you’ve been following our CES reports, you probably already know that it is the gathering place for all things next-gen and high tech and sporting gear isn’t an exception. The latest device we got a glimpse of is the Ebove smart bike from Activetainment and it is already looking like my favorite fitness-related item from the show so far. If you’re a bit of a lazy person or just don’t like to exercise outside, or are afraid of riding bikes like I am, this smart bike might be the perfect gift you can give yourself for Valentine’s Day.

The Ebove smart bike is something that reminds me of virtual reality more than it should and according to Activetainment, it is compatible with virtual reality headsets so that you can slap those goggles on and go trail-biking in Wonderland. But the tablet strapped onto the bike should be enough for most of you. At CES 2015, those interested could try out the Ebove smart bike using a big-screen TV as its main outlet and the device is basically an indoor exercise bike that is capable of mimicking terrain and move itself in accordance with hills and puddles so that you can get a complete and immersive trailing experience.

The main aim of the Ebove smart bike is to recreate trail biking as accurately as possible and it actually does it pretty well, endowing the device with gears and sporting hardware that recreate the experience. The bike is supposedly mostly made up of hardware you can find in regular sporting stores, so this might be a good DIY project for the more diligent and capable of you guys. Any takers? Aside from being a fitness device, the smart bike can also qualify as a gaming device since it can work with video games involving bikes, too. The sad part about the multifunctional smart bike is that it is not yet available for purchase. Nonetheless, Activetainment should be getting this into gyms soon enough, after which commercial production should begin. The company says that by the time we hit 2016 we should be able to get our hands on the bike. My guess is that it will be overly expensive. How much do you think it will cost?

My life-long dream has been to test out every gadget on the market! Considering the fact that I've rapidly destroyed almost every gadget I've had so far, I'm not inclined to owning something, so my ideal outcome would be to have a different gadget each month. I'm really into smartphones, wearables and tablets and I love Playstation and Xbox, I'm sure I'll beat you at your own game (after a month of training... or two)
Previous Zombie Studios Closes Down
Next Evolve Goes Gold, Opening Cinematic Released

The latest Samsung SSD was introduced at CES 2015 this week and we are thinking ...