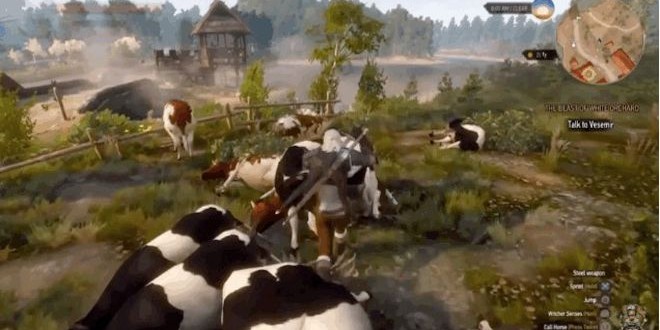 The Witcher 3 has been out for about half a month, so it’s bound to have some bugs and glitches to be smoothed out. But one of the more interesting fixes said the new patch would deploy the “Bovine Defense Force Initiative,” and holy cow, it causes a giant cow monster to spawn whenever a player tries to exploit the game for easy in-game money, which involved killing more cows than a Texas slaughterhouse.

Before the patch, players could farm (excuse the puns) money by going to an area with cows, killing them, meditating so they respawn and sell the freshly acquired hides for an endless amount of money (The Witcher 3 version of counterfeiting, if you will). You can still kill cows and meditate to reflect on your blatant virtual animal rights violations, but after a few dead cows, you’ll have a powerful, bullish monster to deal with.

This patch, and by extension the monster, will mostly affect lower to mid-level players who want get better equipment, which makes the game easier. Higher-level characters more than likely aren’t desperate enough for cash to try anything like this glitch, but there’s bound to be players who’ll want to fight the monster for the fun of it.

Developer CD Projekt Red quickly learned about the glitch when players began exploiting it, and the patch should prevent the Witcher 3 stables from looking like there’s been an outbreak of mad cow disease. Oh yeah, and the patch also fixes some other things not nearly as interesting as the Bovine Defense Force Initiative. You can find the full list on Steam.