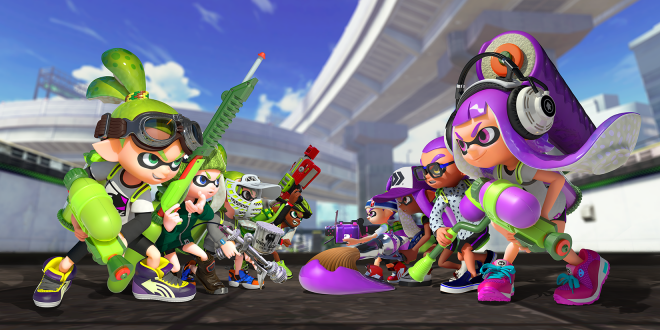 Splatoon was a risky choice for Nintendo. Nintendo’s success rests mostly on its existing IP – Mario, the Legend of Zelda, Metroid, Donkey Kong, and Pokémon are just a few of the massively successful franchises that Nintendo has launched. While we all love these games, there comes a time where risks need to be taken and new avenues explored. That’s what Splatoon is for Nintendo – a new IP bursting with personality, color, and potential. Nintendo took a risk with Splatoon, and that risk fully paid off. 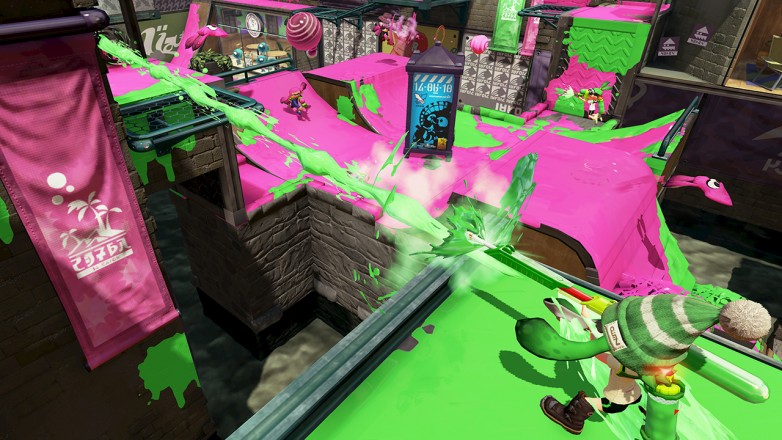 The concept of Splatoon is totally bizarre – you play as an inkling, a creature that can switch back and forth between a humanoid form and the form of a squid. It’s pretty weird, but it’s a lot of fun. Decking out your inkling in cool clothes (hats, shirts, and clothes) and customizing their weapons is really awesome. As you raise your inkling’s level (by playing online matches), new gear becomes available. The inventory also changes every day, which is a really cool feature that makes playing Splatoon every day a tempting prospect. 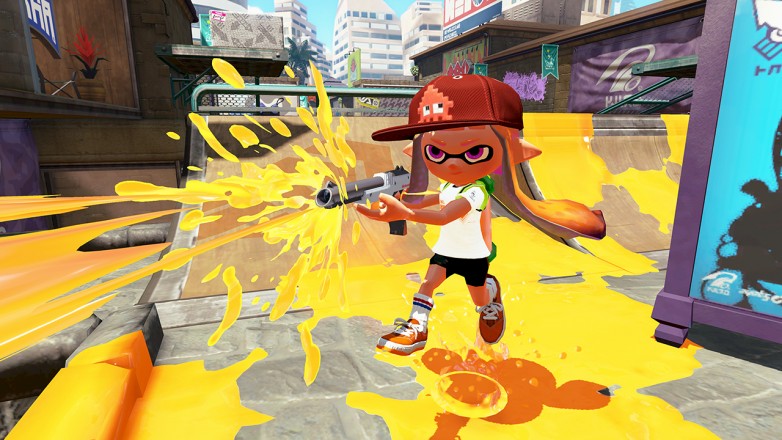 The core gameplay of Splatoon is the turf war. Two teams of four inklings go head-to-head in a battle to control territory. You use your weapon to spray the environment with colored ink, and whichever team has covered the most territory with ink of their color by the end of the match wins. It’s a simple idea, but it’s not something that we see in most shooters. Sure, we see things like domination and king of the hill, but there really isn’t anything like Splatoon out there right now – especially not on Nintendo platforms. Turf wars are actually pretty focused on strategy – acquiring, controlling, and managing territory are all essential to winning a match, as are teamwork and evaluations of the possible risks and rewards of your actions. The cute, colorful aesthetic is just the icing on the cake – underneath lies a game that has solid core gameplay and requires critical thinking and quick, smart reactions. 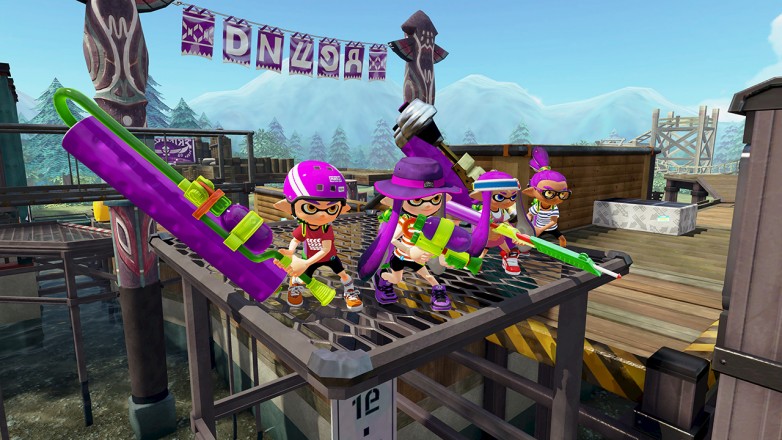 Since most of Splatoon is played online, the multiplayer and network elements of the title are very important. I’ve been playing for quite a while now, and I haven’t run into any serious matchmaking errors. Matches are usually started pretty quickly, and Splatoon includes a fun little mini-game called Squid Jump that you can play on the Wii U gamepad while you wait. I have been kicked out of a few matches due to “connectivity errors,” but these are few and far between. The online multiplayer works extremely well the vast majority of the time. Many have criticized the game’s lack of voice chat, but it really hasn’t bothered me. If you’re playing with a friend, it’s easy enough to shoot each other text messages, talk on the phone, or use Skype to communicate. Players shouldn’t have to resort to these methods, but the lack of in-game voice chat was most definitely intentional. The shockingly offensive remarks that can be found in every single game with voice chat were something that Nintendo wanted to avoid with this title. Creating a “family friendly shooter” wouldn’t exactly be easy with an unrestricted voice chat program. There are definitely things that Nintendo could do to streamline communication during matches. You can currently say “C’mon!” and “Booyah!” to your teammates by pressing up or down (respectively) on the directional pad. More phrases could be added to the directional pad and the ability to customize which phrases you want to have on hand would be a huge improvement on the game’s current lack of communication. Other than that, though, the multiplayer is very well done and it’s definitely the best implementation of online play that we’ve seen in a Nintendo game. Miiverse integration is also done very well, and seeing fellow players roam around Inkopolis adds a lot to the game. The city itself is just as beautiful as the courses – the art style in Splatoon stands out as unique and exciting, and it’s a refreshing change of pace when compared to most shooters. 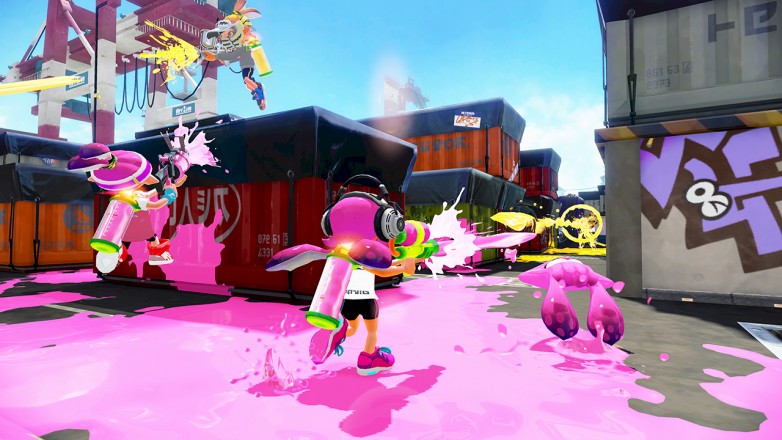 Playing online, leveling up, earning coins, and purchasing gear is what Splatoon is all about. There is, however, a single-player campaign mode called Octo Valley that’s a lot of fun. The missions are a great way to get familiar with the tactics that will lead you to victory in online matches, and the story is absolutely ridiculous and fun. The campaign has its own gear customization process, and no points or gear that you earn in the single-player mode will carry over to multiplayer. The missions are pretty easy, but they’re a lot of fun. It’s obvious that Nintendo prioritized fun over challenge, and it works well in the single-player mode. The multiplayer is much more challenging, so there’s a nice variety of difficulty in Splatoon. In addition to the online matches and single-player campaign, there is also a local multiplayer mode called the Battle Dojo. It’s a 1v1 local multiplayer match in which each player attempts to pop the most balloons. The mode isn’t as polished as the rest of the game, but it’s still fun, and it’s nice to see that Nintendo didn’t neglect local multiplayer with Splatoon. 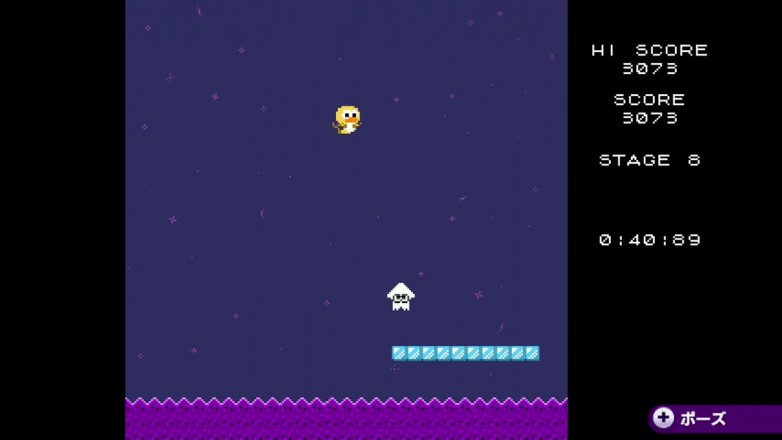 At first glance, Splatoon is a pretty light offering. Only three game modes come on the disc, and only four stages are available for play each day – two for normal matches and two for ranked matches (more competitive matches that are unlocked at level 10). But, once you really get into Splatoon, the narrow variety of game modes doesn’t seem to be a problem. Playing the game is an absolute blast, and I never once got bored of playing online matches. If you do find yourself getting tired of turf war, you can head into Octo Valley or set a new high score in Squid Jump (pictured above). Whatever way you decide to play it, you’re going to have a lot of fun with Splatoon. There’s something here for everyone – from hardcore gamers to first-time players. Splatoon is a promising new IP from Nintendo, and, hopefully, an indication that more unique experiences and new IP will be coming to Nintendo platforms soon.

Splatoon was a risky choice for Nintendo. Nintendo's success rests mostly on its existing IP - Mario, the Legend of Zelda, Metroid, Donkey Kong, and Pokémon are just a few of the massively successful franchises that Nintendo has launched. While we all love these games, there comes a time where risks&hellip;
Splatoon Review – A Beautiful Mess
Splatoon Review – A Beautiful Mess
Aria Maryn

Splatoon is a beautiful game that brings personality, color, and a whole lot of fun to Wii U and establishes itself as a promising and unique new IP for Nintendo.

I'm Aria! When I'm not doing other things, I'm either playing video games or writing about them. If you like games, anime, and random stuff, you can follow me on Twitter @Sage0fForest
@@Sage0fForest
Previous WB Pulls Batman: Arkham Knight From Sale
Next iOS Spotlight: Blades of Brim