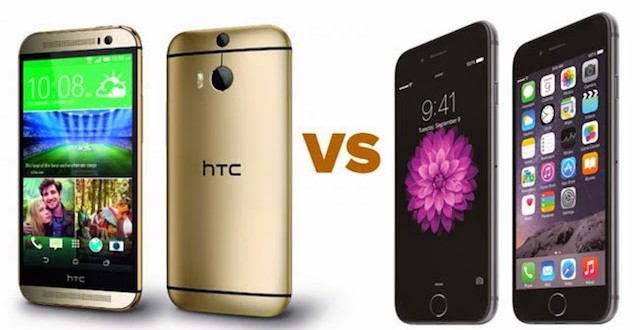 HTC One M9 vs iPhone 6 Plus - Worlds apart

HTC One M9 vs iPhone 6 Plus – Worlds apart

The iPhone 6 Plus is one of Apple’s most well received products of all time, which is not surprising considering that the folks over at Cupertino included plenty of improvements over last year’s model and even over the regular iPhone 6. However, despite all the improvements many people don’t consider the smartphone to be up to par with some of its Android counterparts due to the overall unimpressive specs. For example, the upcoming HTC One M9 is expected to be one of the flagships capable of completely blowing away the iPhone 6 Plus, or at least that’s what the word on the street is. Are those just exaggerated claims? We don’t know yet, but we’re planing to find out by taking a look at everything we know so far about the HTC One M9 and comparing it to Apple’s latest iteration of its popular flagship.

While we already know pretty much everything there is to know about the iPhone 6 Plus, the HTC One M9 is still partially a mystery. HTC didn’t officially announce the device yet, but as always, there are plenty of rumors and leaks to take into consideration, although some are clearly more believable than others. Stories involving the upcoming device are rather conflicting but at least most source seem to agree that the HTC One M9 will likely come with a different name attached to it. The flagship is believed to be called HTC Hima and feature a 5.2-inch display with 1440 x 2560 resolution and 564 pixel density. There will apparently also be an “Ultra” version of the device coming in at 5.5-inches, just like the iPhone 6 Plus. The display on the big iPhone is overall not bad but its 1080 x 1920 resolution and 401 ppi can only be considered average nowadays. Most of the upcoming flagships smartphones are expected to come equipped with 2K screens and the HTC One M9 will be among them.

Hardware-wise, the iPhone 6 Plus is offering Apple’s latest A8 64-bit chipset with dual-core Cyclone CPU clocked at 1.4 GHz and quad-core PowerVR GX6450 GPU. Other specs include: 8 MP primary camera with optical image stabilization on the back along with 1.2 MP front-facing shooter, 1 GB of RAM, and 2,915 mAh Li-Po battery pack. The iPhone 6 Plus is available in 16/64/128GB storage options and there is no microSD card slot. As for its competitior, we only have the rumored specs for the HTC One M9, so make sure you take this with a grain of salt for now. However, we’re merely looking at improvements over the previous model and a natural progression of the series as a whole. In other words, these rumored specs don’t sound far fetched at all and it’s very likely that this is indeed what the HTC One M9 will come equipped with. It’s worth mentioning though, that there are two possible configurations here from what I can tell.

Specifically, HTC Hima is expected to sport a quad-core Snapdragon 805 processor, 16 MP rear-facing camera with OIS, and 3,500 mAh battery according to a report by sources from within the Chinese media. The other possible set of specs include the upcoming octa-core Qualcomm Snapdragon 810 64-bit chipset, 20.7 sensor on the rear camera, and 2,840 mAh battery. The front camera is said to be either a 13 MP shooter, or a 4 MP one with HTC’s already infamous UltraPixel technology. In both cases the reports claim that the HTC One M9 will feature 3 GB of RAM and storage options are said to include 64GB and 128 GB with no mention of a microSD card. Both set of specs seem overall better than what the iPhone 6 Plus comes equipped with, although in terms of performance Apple’s device runs very smooth overall, so it can definitely make due with what it has. However, if you are looking for a more powerful device for whatever reason, the HTC One M9 seems to be the way to go. Also, there’s no denying that its cameras also seem much better at first glance.

The question here is which of the two sets of specs will we end up seeing on the Hima? Well, the Chinese media report suggests that the flagship will actually come in two variants, one of which will have the name Prime attached to it. By process of elimination we can only conclude that the HTC One M9 Prime will feature the Snapdragon 810 chipset along with the other specs mentioned in the second report. Admittedly, it’s a bit strange that the premium version should have a smaller battery, so that particular detail doesn’t quite add up to be honest. Still, the rest of the specs definitely look good, so just like its predecessor, the HTC One M9 will easily be able to go head-to-head with pretty much every other flagship out there, including the iPhone 6 Plus.

As for the price, we should be looking at something along the lines of $650-$700 for the Hima, which is overall a pretty standard price for flagship smartphones at launch. The iPhone 6 Plus is unsurprisingly a bit more expensive, usually coming in at $750-$800 unlocked for the 16 GB version and only going up from there. In terms of operating systems our two competitors are worlds apart, with the iPhone 6 Plus running on the iOS 8 and the HTC One M9 expected to come equipped with Android Lollipop. Interestingly, rumors are suggesting that HTC is already working on also delivering a Windows Phone variant of the upcoming flagship at some point after the Android Lollipop model comes out.

Speaking of the release date, the HTC One M9 is likely to make its debut in March based on HTC’s history of releasing its flagships during that month. The iPhone 6 Plus will already be roughly half a year old by then, so it will be interesting to see if the device will continue to be as sought after as it was these last couple of months. Not only because of the HTC One M9, but also because of two other highly anticipated flagships that are expected to release during that period – the Samsung Galaxy S6 and the LG G4.

I’m Load The Game’s co-founder and community manager, and whenever I’m not answering questions on social media platforms, I spend my time digging up the latest news and rumors and writing them up. That’s not to say I’m all work and no fun, not at all. If my spare time allows it, I like to engage in some good old fashioned online carnage. If it’s an MMO with swords and lots of PvP, I’m most likely in it. Oh, and if you’re looking to pick a fight in Tekken or Mortal Kombat, I’ll be more than happy to assist! Connect with me by email markjudge (@) loadthegame.com only
@@MarkJudgeLTG
Previous Galaxy Grand 3 photos leaked, show off thinner, lighter smartphone
Next Final Fantasy X/X-2 Confirmed for PS4