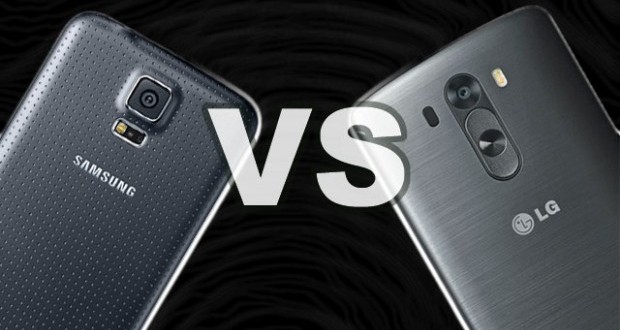 This year the battle between Korean rivals Samsung and LG was pretty back and forth, but ultimately I would have to say that the former managed to win overall thanks to the Samsung Galaxy Note 4. The Galaxy S5 on the other hand couldn’t match the LG G3, which was considered by many to be the absolutely best smartphone on the market when in launched. But that’s all in the past and now we are looking forward to the next major battle between the two tech giants. Although the Samsung Galaxy Note 4 will still pose a threat to LG for months to come, a more interesting confrontation will star two upcoming next generation devices – the Samsung Galaxy S6 and the LG G4.

It goes without saying that both smartphones are expected to be improved versions of their already impressive predecessors. While neither of the two companies have officially announced their respective device, there are plenty of rumors in regards to possible specs and release dates for both of them. With that in mind, we’re going to take a look at only the most believable rumors in order to figure out which device would win in the upcoming Samsung Galaxy S6 vs LG G4 battle. Normally I also like to take into account pricing when comparing two similar devices but I’ll make an exception this time as there is little to no reliable info out there regarding this particular aspect. Moreover, their predecessors were priced similarly at launch, so I suspect that we should see the same scenario when it comes to these two handsets as well. That being said, let’s kick off our Samsung Galaxy S6 vs LG G4 comparison, shall we?

First off, let’s take a quick look at the Samsung Galaxy S6 as there is a bit more info out there to analyze. The smartphone’s specs were leaked several times these past couple of weeks, including on the AnTuTu benchmarking database. Interestingly, all signs point at a 5.5-inch display with 1440 x 2560 pixel resolution, which is a pretty big improvement over the S5’s 5.1-inch @ 1080 x 1920 resolution panel. Indeed, the recent trend of making flagship smartphones incredibly big will apparently continue with the Samsung Galaxy S6, and maybe with the LG G4 as well. LG’s current flagship already comes equipped with a large 5.5-inch display but rumor has it that the next iteration will sport an even bigger one, possibly measuring 5.7-inches. Resolution should again be 1440 x 2560, so all in all the Samsung Galaxy S6 and the LG G4 are expected to feature very similar screens, albeit the latter’s might be a bit bigger.

As for innovative display features, we might end up seeing a bendable display on the LG G4. The company previously stated that it will launch smartphones with this type of display next year and the first one seems to be the LG G Flex 2, which is expected to be announced at the CES 2015 in January. There are reports saying that the LG G4 will also feature a bendable display but I can’t vouch for the accuracy of these reports, so I’ll just leave it at that. As for the Samsung Galaxy S6, you can expect the same Super AMOLED technology we’re already used to from previous devices. In addition, the handset’s screen will probably also feature the new Corning Gorilla Glass 4 protection. The fourth generation protective glass is already on the Galaxy Alpha and the Galaxy Note 4, which means that it will very likely be available on the Samsung Galaxy S6 flagship as well.

Displays aside, let’s take a quick look at some of the hardware improvements. Word on the street is that each manufacturer is looking to equip their next flagship with powerful in-house 64-bit processors. Samsung is said to take it even one step further and couple the self-manufactured chipset with its own GPU. However, both the Samsung Galaxy S6 and the LG G4 will likely come in at least two variants, one of which is almost certain to sport the highly anticipated Qualcomm Snapdragon 810 chipset with Adreno 430 GPU. This processor is also able to support 64-bit architecture, a feature that will soon be seen as a must on all Android devices due to Android Lollipop’s push toward 64-bit apps. In terms of memory, we can expect at least 3 GB of RAM from both smartphones, although the LG G4 is rumored to offer 4 GB, just like the Samsung Galaxy Note 4. Storage should also be up to par, with 32 GB starting memory and microSD card support good for up to an additional 128 GB on the Samsung Galaxy S6. The LG G4 should offer something similar, albeit there are few reliable reports concerning its storage at this time.

In terms of cameras, it’s almost certain that the Samsung Galaxy S6 will come equipped with a 20 MP primary shooter on the back complemented by a 5 MP selfie snapper on the front. The LG G4 on the other hand is believed to sport the company’s newly unveiled 20.7 MP sensor with improved optical image stabilization. There are little to no details regarding battery life at this time I’m afraid. I assume we should see at least a 3,000 mAh pack and ideally a battery saving mode on each device, but that’s merely speculation so take it for what it is. What’s pretty much guaranteed however is that both the Samsung Galaxy S6 and the LG G4 will run on Android Lollipop. The latest update to the operating system should become the norm by then, which means that pretty much all upcoming flagships will be powered by it, including the aforementioned two.

Finally, it’s worth mentioning a little something about the release date for each of the smartphones. As you might imagine, nothing is officially confirmed, but most sources are claiming that the Samsung Galaxy S6 should be announced at the MWC 2015 in March and launched shortly after. By comparison, the S5 was announced in February and launched in April, so it looks like Samsung wants to release its successor a bit earlier this year. Interestingly, something similar is expected from LG as well and we might see the LG G4 as soon as April. The G3 only came out in June but the increasingly fierce competition on the smartphone market is now forcing LG to release its flagship a bit earlier this time around.

If even half the rumors are true, we should the Samsung Galaxy S6 and the LG G4 make their first official appearances around the same time. In addition, the two smartphones should also come equipped with roughly similar specs and the same operating system in the form of Android Lollipop. Also, we can expect premium prices for both handsets, so whatever you choose it’s guaranteed to be pretty expensive. There are still plenty of details we still don’t know, but for now it seems like we should be looking at a relatively even battle when the time comes. As it stands, it’s really hard to declare a winner right now, which means that you’ll have to decide for us. So, what flagship smartphone do you think will come out on top next year, the Samsung Galaxy S6, or the LG G4?

I’m Load The Game’s co-founder and community manager, and whenever I’m not answering questions on social media platforms, I spend my time digging up the latest news and rumors and writing them up. That’s not to say I’m all work and no fun, not at all. If my spare time allows it, I like to engage in some good old fashioned online carnage. If it’s an MMO with swords and lots of PvP, I’m most likely in it. Oh, and if you’re looking to pick a fight in Tekken or Mortal Kombat, I’ll be more than happy to assist! Connect with me by email markjudge (@) loadthegame.com only
@@MarkJudgeLTG
Previous Game of Thrones now available on Amazon and Google Play
Next Youtube offline video viewing now live