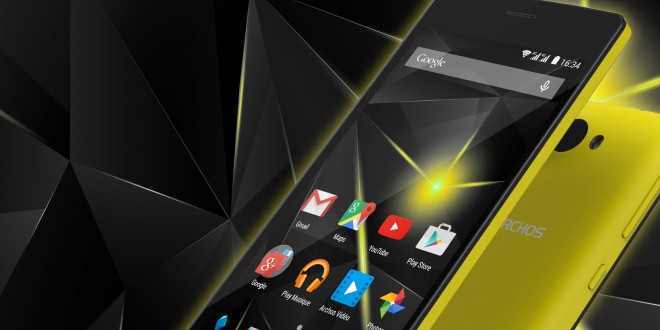 Archos 50 Diamond and cheap tablets announced ahead of CES

The Archos 50 Diamond smartphone is one of the few devices announced ahead of the official start of CES 2015, and the handset packs quite the punch. Besides announcing the smartphone, Archos decided to unveil three affordable tablets, too, which will fare nicely in its portfolio. If you are a tech-enthusiast looking for a cheap, yet good quality tablet or smartphone, Archos might have just the right thing for you.

The French company announced a wide set of mobile devices ahead of CES 2015, the Archos 50 Diamond being the most notable one. The handset has a 5 inch display with a 1080p resolution, and packs a Snapdragon 615 CPU backed by 2 GB RAM and 16 GB memory. The phone has a pretty beefy 16 MP camera on the rear and a massive 8 MP camera on the front. It also touts dual SIM slots, LTE, all of which are powered by a pretty big 2700 mAH battery. The Archos 50 Diamond seems like a pretty nice deal and its design is pretty, too, but the handset won’t stand a chance unless the company prices it correctly and below the $300 mark.

Archos didn’t stop at the Archos 50 Diamond, though, announcing 3 more smartphones which have mid-range specs that aren’t anything to write home about. Nonetheless, they could be great budget acquisitions. The Archos 45B Helium has a 4.5 inch display with a 854*480 resolution, a Snapdragon 410 CPU backed by 512 MB RAM and 4 GB expandable internal storage. It also packs a 5 MP rear camera for the occasional photo shoot. Its bigger brother, the 50B Helium has a larger 5 inch display with a 720p resolution, the same Snapdragon 410 SoC backed by 1 GB RAM and 8 GB expandable internal storage. Last, but not least, Archos launched the 50X Helium, which has a 5 inch display with a 854*480 resolution and packs a 5 MP camera and a MediaTek MK6732M CPU.

Even though the Archos 50 Diamond is the only notable announcement here, the other smartphones and tablets bringing nothing new to the market, the whole line-up seems to be a line of affordable devices made for entry-level users and markets. If the French company prices these gadgets correctly, they could become crowd-favorites in the budget category. Otherwise, if they go above the lowest prices in their respective ranges, they might turn out to be flops we will forget about by next week. Pricing and availability for the 7 devices hasn’t been announced, but we are sure to hear more from Archos during the day.

My life-long dream has been to test out every gadget on the market! Considering the fact that I've rapidly destroyed almost every gadget I've had so far, I'm not inclined to owning something, so my ideal outcome would be to have a different gadget each month. I'm really into smartphones, wearables and tablets and I love Playstation and Xbox, I'm sure I'll beat you at your own game (after a month of training... or two)
Previous Acer Liquid Z410 64-bit mid-ranger takes the stage
Next The LG G Flex 2 looks great in the posters at CES 2015