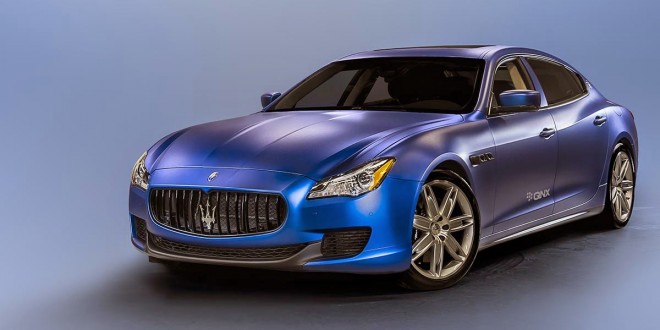 Maserati is not a name that you would usually hear when it comes to BlackBerry QNX or any type of run of the mill technology, since the luxury autos are not something to joke about, especially considering their prices. Nonetheless, CES 2015 brought us a surprise from both Maserati and BlackBerry in the form of a QNX powered Maserati concept. BlackBerry QNX is yet another car infotainment system that can rival with Pioneer and Parrot. The concept car introduced at CES is based on the  Maserati Quattroporte GTS.

On the beautiful Maserati is outfitted with a boat-load of sensors and cameras, and while from a demo video you might notice a pretty long response time from QNX, since this is just a concept and a prototype, we are hoping response times will be improved. Regardless of what stage the development is in, the features the vehicle presented at CES 2015 are pretty neat, but they are not entirely innovative. The Maserati has been outfitted with various cameras documenting everything that is happening around the car, their feeds being accessed through voice commands. The HUD that will adorn the dashboard will notify drivers of speed, turns, obstacles, wholes in the ground or any other things that may obstruct their view or cause damage to the car or the passengers.

With the help of the cameras and sensors, the Maserati can show the driver a full 360 degree view of their surroundings, in case they are in need of such overview. The mirrors that are usually found in most cars are replaced by LCD screens which are used by QNX in conjunction with the cameras to provide wide angle documentation of everything that is in front of, behind or next to the vehicle. Like most of the car infotainment systems introduced at CES 2015, QNX in the Maserati features Bluetooth, voice commands, audio streaming and can pair with Apple CarPlay and Android Auto as well. The whole system is powered by Qualcomm’s 602A CPU. Pricing and availability of the QNX powered Maserati concept car hasn’t been revealed, but we are hoping to see more of this in the next few months.

My life-long dream has been to test out every gadget on the market! Considering the fact that I've rapidly destroyed almost every gadget I've had so far, I'm not inclined to owning something, so my ideal outcome would be to have a different gadget each month. I'm really into smartphones, wearables and tablets and I love Playstation and Xbox, I'm sure I'll beat you at your own game (after a month of training... or two)
Previous CyanogenMod 12 with Android 5.0.1 Lollipop now available for most devices
Next HTC One M9 Hima will have a MediaTek and a Snapdragon variant