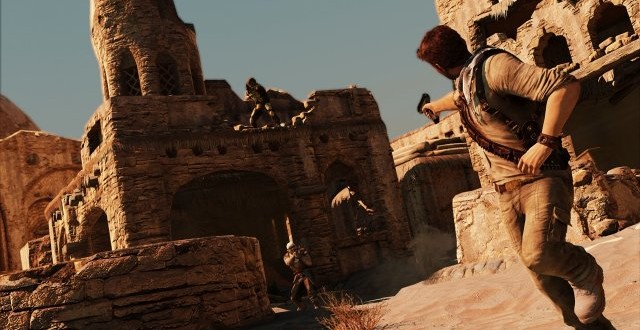 Uncharted 4 is already being praised by insiders

Naughty Dog has kept Uncharted 4 details to a bare minimum up to this point. Luckily, a couple of industry insiders have recently leaked some very interesting bits of info regarding the upcoming title. The first few leaks come from the notorious Tidux, who went on Twitter and revealed that Nathan Drake will be returning as the protagonist in Uncharted 4. He then went on to say that the latest build for the game ranks 14 on a scale from 0 to 10. Tidux’s most interesting tweet however can be seen below. We’re not sure what he saw, but it would appear that it made a strong impression on him.

Just seen a new build of Uncharted, I have no words #GreatnessAwaits #PS4

Another well-known industry insider that goes by the name of Ahsan Rasheed aka thuway also talked a bit about Uncharted 4 today. Interestingly enough, both insiders posted the tweets around the same time so we assume that they both saw the same footage. “Uncharted PS4 visuals will make you say, “Quantum/Order/Division who?” thuway said. He also mentions that it features “Stupidly impressive tricks and tech.” The new Uncharted’s graphics must really be amazing if games like Quantum Break, The Order: 1886 and The Division apparently pale in comparison. These three titles are some of the most anticipated of the year so Uncharted 4 must really be on a whole new level according to the leaker.

Rasheed also talked a bit about what else is going on at Sony at the moment. “Uncharted preview is being described as breathtaking. I don’t know about any more Sony megatons- but the word the last word I got is: The 1st Party stuff is seriously impressive. Whenever it’s shown, it will make people take notice.” “Oh and before you ask, no I haven’t heard about any SECRET PS4 titles or GG’s game showing up. The only one I knew was Castlevania Souls.” Unfortunately, he came up empty handed when it comes to Microsoft leaks. “I tried pressing for more info, nothing there. Also no new info on MS’s megatons. Looks like leaks are sealed. See you guys next Monday.” It’s not surprising since it’s common knowledge that Microsoft runs a tighter ship than Sony. As a side note, Castelvania Souls is thuway’s nickname for the recently leaked Project Beast.

This is everything  insiders have said about Uncharted 4 for the moment, but more leaks will surely follow. If not, we just have to wait until E3 2014 where the game will surely be present. While not confirmed by name, the next Uncharted title will be a PS4 exclusive and will not feature the voice of Todd Stashwick anymore. Stay tuned for more updates and news.

I’m Load The Game’s co-founder and community manager, and whenever I’m not answering questions on social media platforms, I spend my time digging up the latest news and rumors and writing them up. That’s not to say I’m all work and no fun, not at all. If my spare time allows it, I like to engage in some good old fashioned online carnage. If it’s an MMO with swords and lots of PvP, I’m most likely in it. Oh, and if you’re looking to pick a fight in Tekken or Mortal Kombat, I’ll be more than happy to assist! Connect with me by email markjudge (@) loadthegame.com only
@@MarkJudgeLTG
Previous First Project Beast gameplay footage revealed
Next 6 Weird Android Games you probably never heard of!