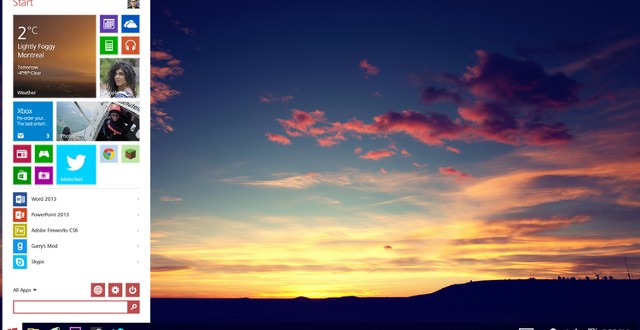 Windows 9 rumored to be unveiled on September 30th

Earlier this month we reported that a preview of the upcoming Windows 9 operating system will presumably arrive in late September or early October. This rumor is still going strong and now there’s one more source backing it up while also giving us a more specific date for when to expect the OS. According to The Verge, Microsoft will be a hosting a press event on September 30th where they will talk about the major changes coming to Windows 9, also known as Threshold. The article cites sources close to the matter, but mentions that this date could still change. However, they also suggest that a technology preview will be released in late September, more specifically, on September 30th during the event or shortly after assuming the date doesn’t change of course.

We’ve learned from previous leaks that Windows 9 will once again feature a start menu, albeit a mini one. This time around we’re going to see a combination between the Windows 7 start menu and the Windows 8 interface. Sounds pretty interesting to be honest and looks much better than Windows 8 at first glance. Threshold comes with some other user interface changes as well and has the ability to run windowed Metro-style applications. Microsoft also decided to remove the Charms bar, which was not exactly a beloved feature on the previous version of the operating system. Finally, word on the street is that Windows 9 will have its own version of Cortana, the intelligent personal assistant inspired by the Halo series. Windows Phone owners are also familiar with her as she is one of the main features on devices running on the mobile OS.

Keep in mind that all of this comes from various leaks that may or may not be reliable so take them with a grain of salt for the time being. Stay tuned for more news and updates.

I’m Load The Game’s co-founder and community manager, and whenever I’m not answering questions on social media platforms, I spend my time digging up the latest news and rumors and writing them up. That’s not to say I’m all work and no fun, not at all. If my spare time allows it, I like to engage in some good old fashioned online carnage. If it’s an MMO with swords and lots of PvP, I’m most likely in it. Oh, and if you’re looking to pick a fight in Tekken or Mortal Kombat, I’ll be more than happy to assist! Connect with me by email markjudge (@) loadthegame.com only
@@MarkJudgeLTG
Previous Top 10 Android apps for smart use of your phone!
Next Motorola to release up to 8 new devices before 2015